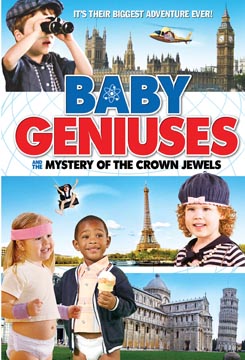 Thanks to Anchor Bay Entertainment, I was given a copy of Baby Geniuses and the Mystery of the Crown Jewels DVD to review here on Frugal and Fun Mom!

Baby Geniuses and the Mystery of the Crown Jewels begins with an evil baby who steals the Crown Jewels from The Tower Of London. The Baby Squad, a top-secret organization consisting of super baby geniuses, gets involved in order to solve the mystery and get the jewels back for the Queen’s Jubilee. The Baby Geniuses, Skip, Jordan, Alfred and Gabi, end up getting more than they bargained for when they have to solve new crimes caused by the evil baby, and then chase him all over Europe.

This story is filled with gadgets, inventions, and mystery. It also has lots of diaper wearing babies, comedy, and some over the top special effects. It stars Academy Award winner Jon Voight along with  Skyler Shaye, Casey Graf, Rob Bruner, and Jamie Andrews and is directed by Sean McNamara (Soul Surfer).  The film is Rated G and it is a Dove.org Family Approved Movie.

My kids LOVED this film! It is silly, fun, and has scenes suited for their age group (4-7).  Many of the characters over-act, which also appealed to my kids.  I’m amazed that they were able to get the toddlers to sit still long enough to film the scenes. Jon Voight who is many different taxi cab characters throughout the film, plays them up with exaggerated accents, costumes, and big noses created by make-up.

I asked my kids what they liked about the movie, and they said the babies talking, the gadgets in their toys, and the scenes when the babies are helping the adults solve the crimes. My daughter who is 4, liked it so much that she was pretending to be a spy around the house. I feel that this film is appropriate for younger children, and as an adult you have to appreciate that it is intended for kids, and remember that as you are watching it.

This DVD was released February 5, 2013 and you can look for it in stores now and at Amazon Baby Geniuses And The Mystery Of The Crown Jewels. It runs for 84 minutes and retails for $19.98.

Frugal and Fun Mom did not receive compensation for this review but was provided a Free “Baby Geniuses and the Mystery of the Crown Jewels DVD” to facilitate this post from Grand Communications. The opinions expressed in this review are that of my own.