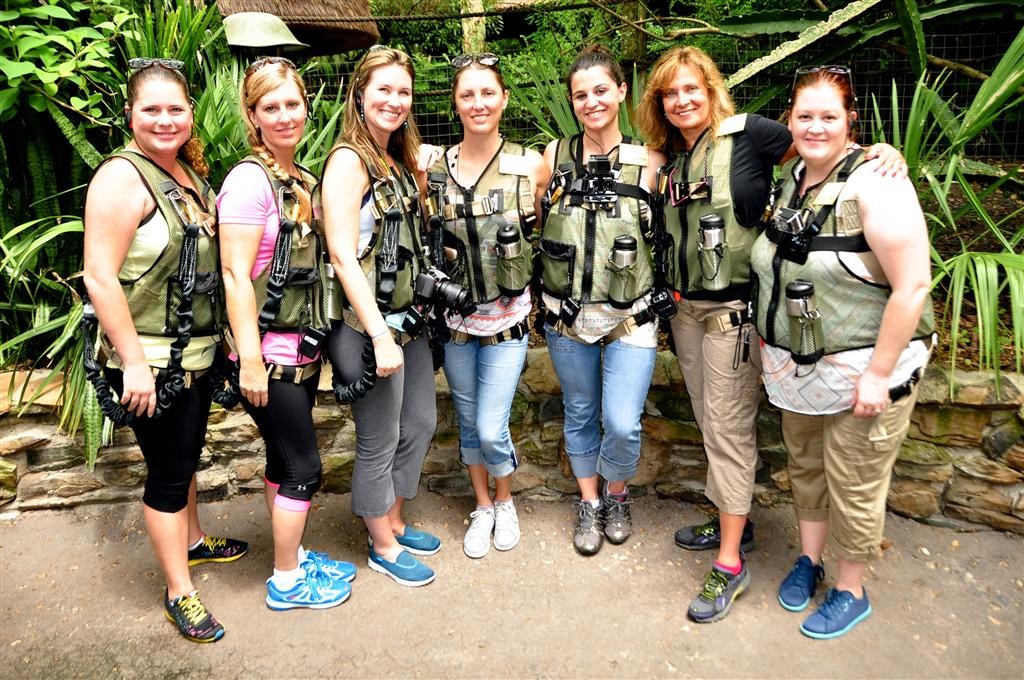 As part of the Monkey Kingdom Event, myself and other bloggers received a complimentary experience to check out the Wild Africa Trek at Disney’s Animal Kingdom. Opinions expressed are that of my own.

This 3 hour excursion includes a privately guided VIP expedition with close encounters with exotic African wildlife in their native habitat as well as photo services and a gourmet lunch. 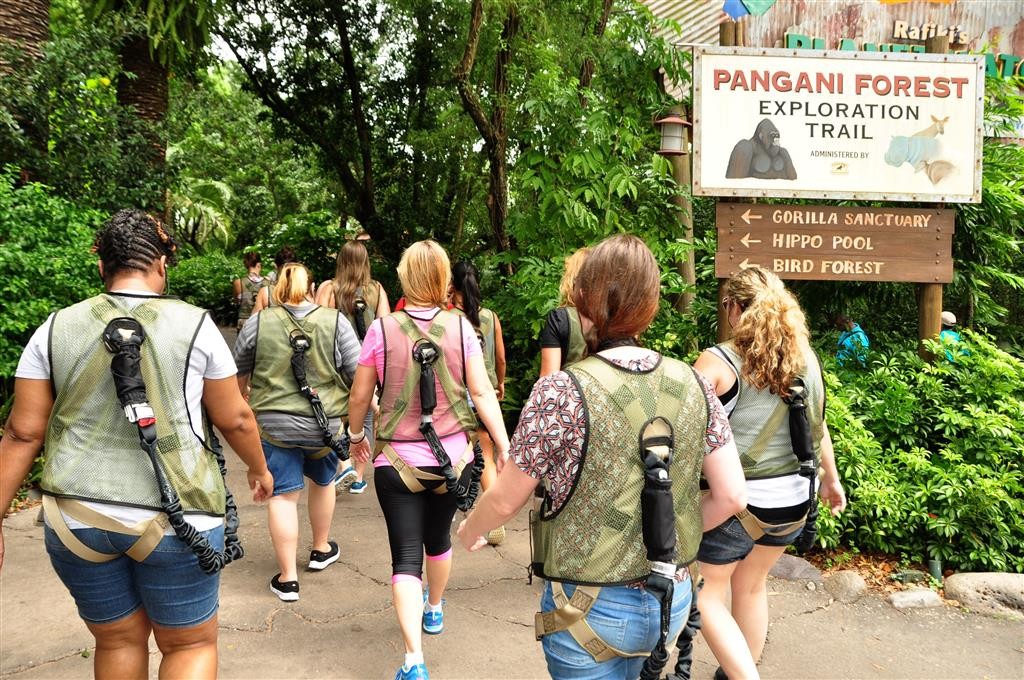 Before we could even begin our journey, we first had to get dressed in our gear.  A cast member placed a harness on each of use and made sure it was secure. In addition we were provided a locker to store loose items like cell phones, backpacks, and cameras.

FYI, you are able to bring a camera or phone as long as it can be attached. I decided to leave mine behind and document my experience by using the provided photos compliments of the Wild Africa Trek. I think their photos turned out amazing, and I have great shots of what I experienced. 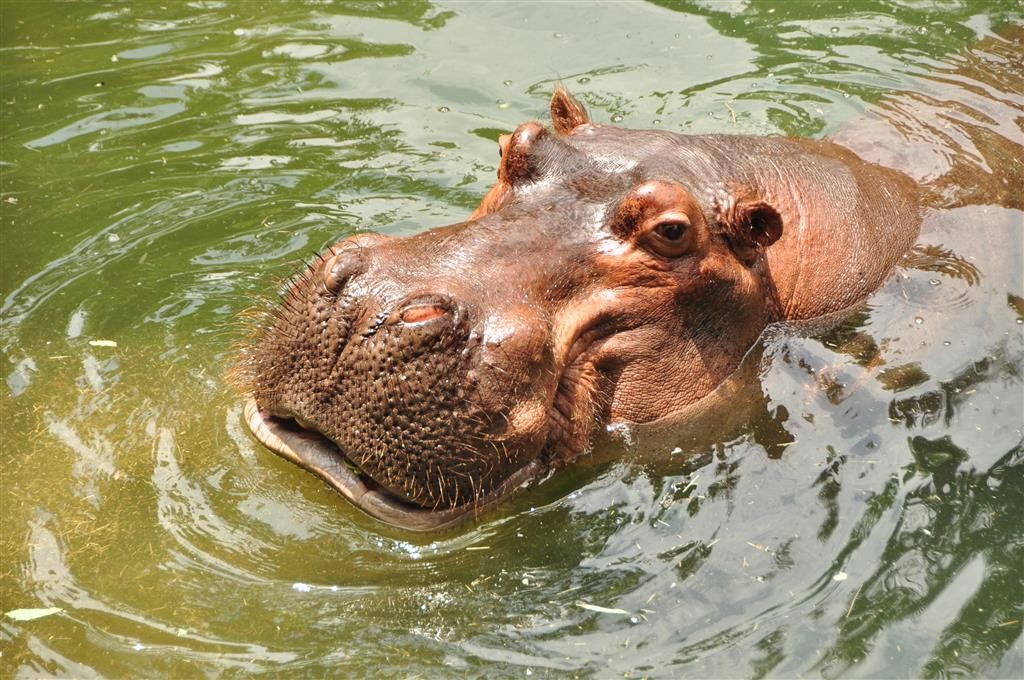 With a souvenir water bottle in tow, we then headed out into the park and our first stop was to pay a visit to a black and white monkey called a Colobus Monkey. Then, we went back behind the habitats to get up close to the animals.

Next, we saw zebras out in a field and next were connected to a metal system so we could walk out on a ledge to see 2 male hippos. The hippos were awesome and we got to check out the large mouths as they were fed. Their handler shared that the females live in large groups together and males typically are keep separate in their own enclosure due to aggressive behavior. 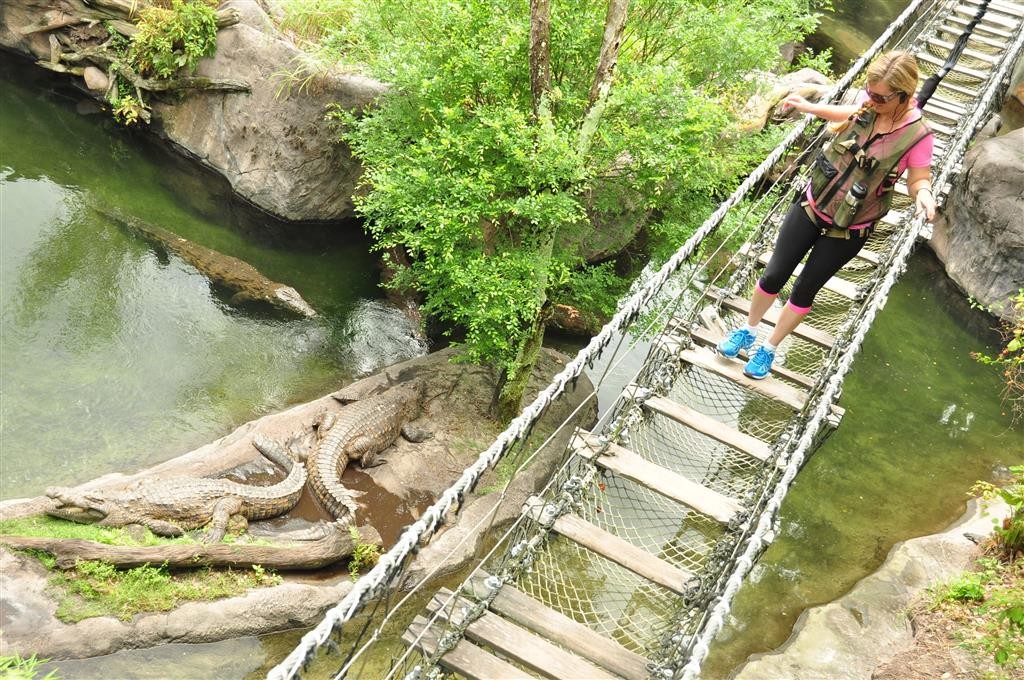 It was then time to head out across a rope bridge. This gave us an excellent aerial view of crocodiles and again we were attached to lines above our heads via harnesses.

Some of the planks were close together and others were narrower and further apart. It was all good though, because there was a net below just in case we slipped. 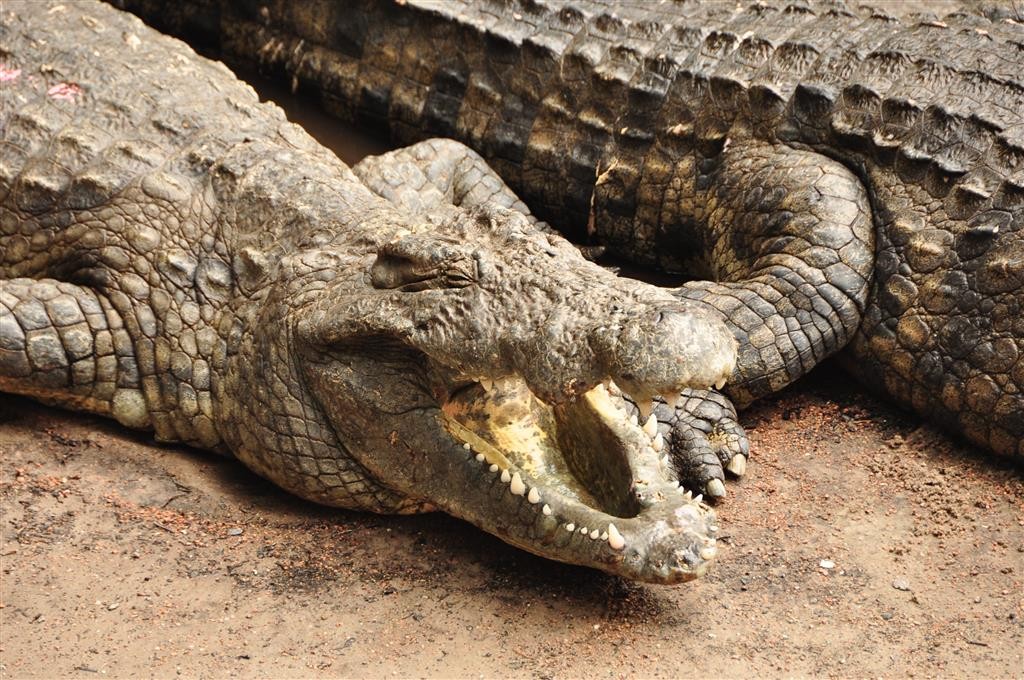 As we were crossing the 2 bridges, we also noticed pink strips on a few of the reptiles backs.

Our guide shared that those animals had received their well check ups and that was their way of keeping track of it. 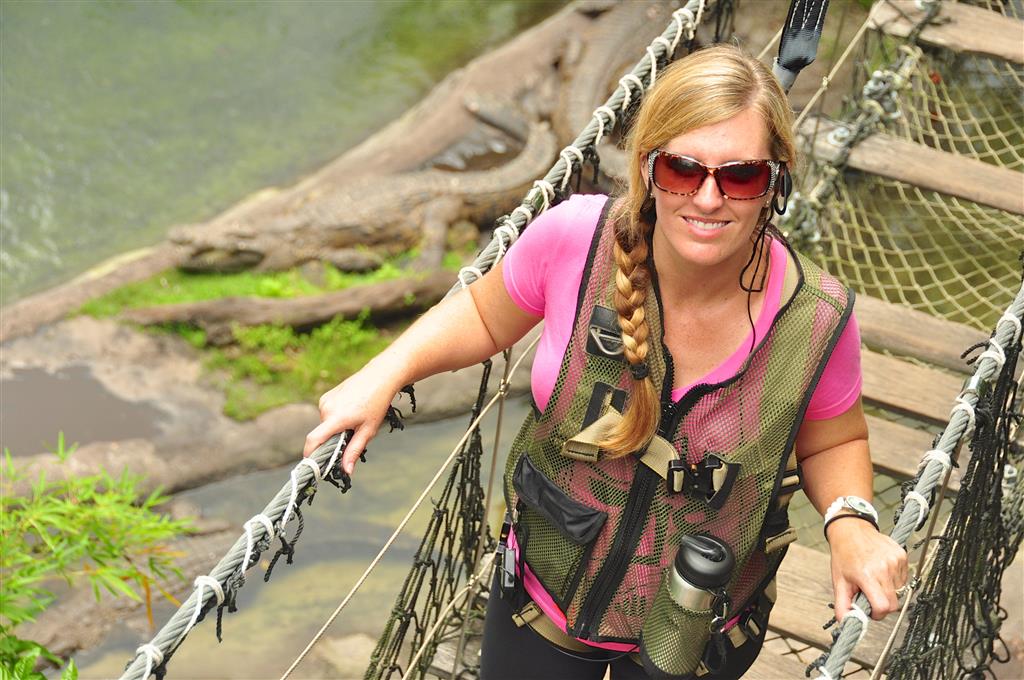 As you can see, I am right above the crocodiles on a ledge. It was so neat to be that close and but I was glad I was hooked up again. Just check out the teeth on those guys.

No need to go swimming with these creatures, I prefer to stay whole. 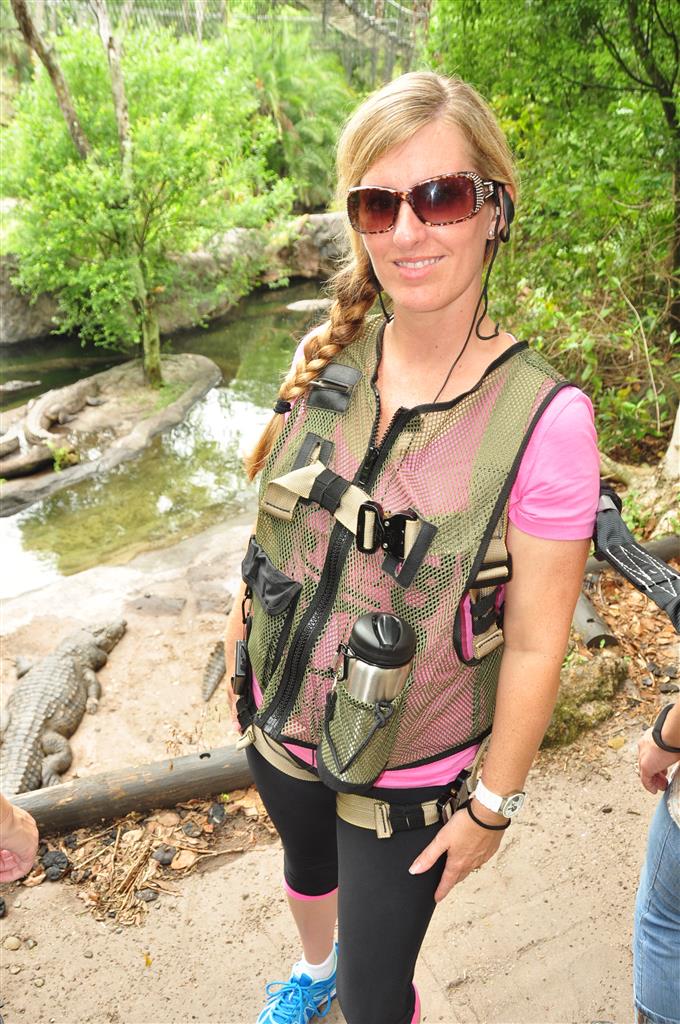 After this, it was time to take off the harnesses and go for a Safari out on the Savannah.

As we settled into the vehicle, we were provided frosty towels with essential oils to cool off as well as binoculars to zoom into our surroundings. 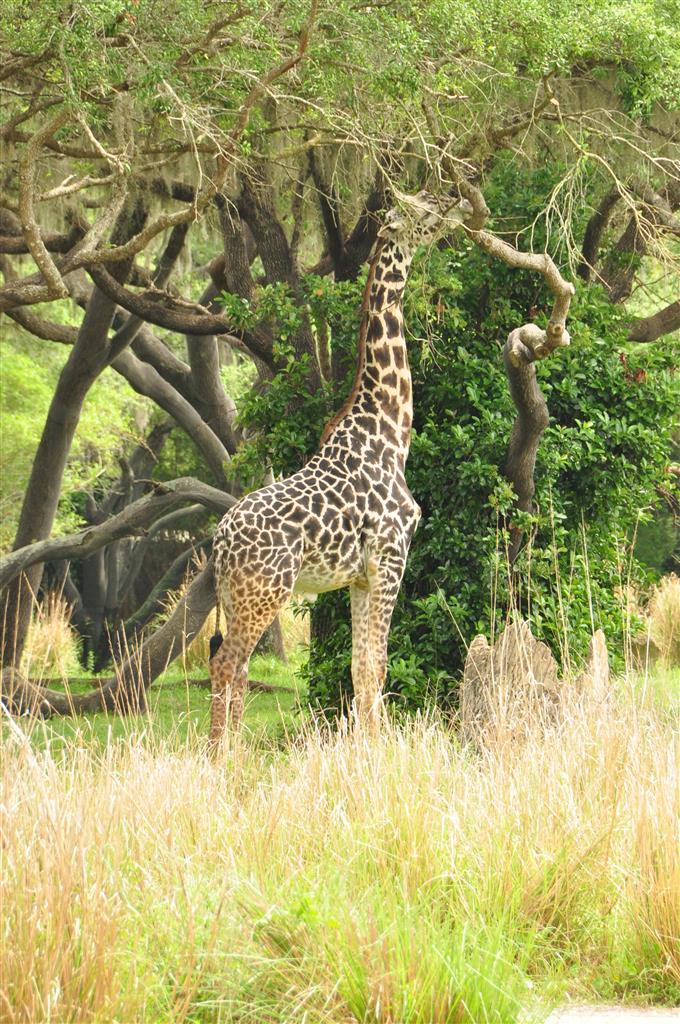 Out on our drive we saw beautifully patterned giraffes, other hoofed animals, and elephants.

We also observed a flock of the Greater Flamingo. Our guide noted that the beta carotene in their food is what makes them pink. 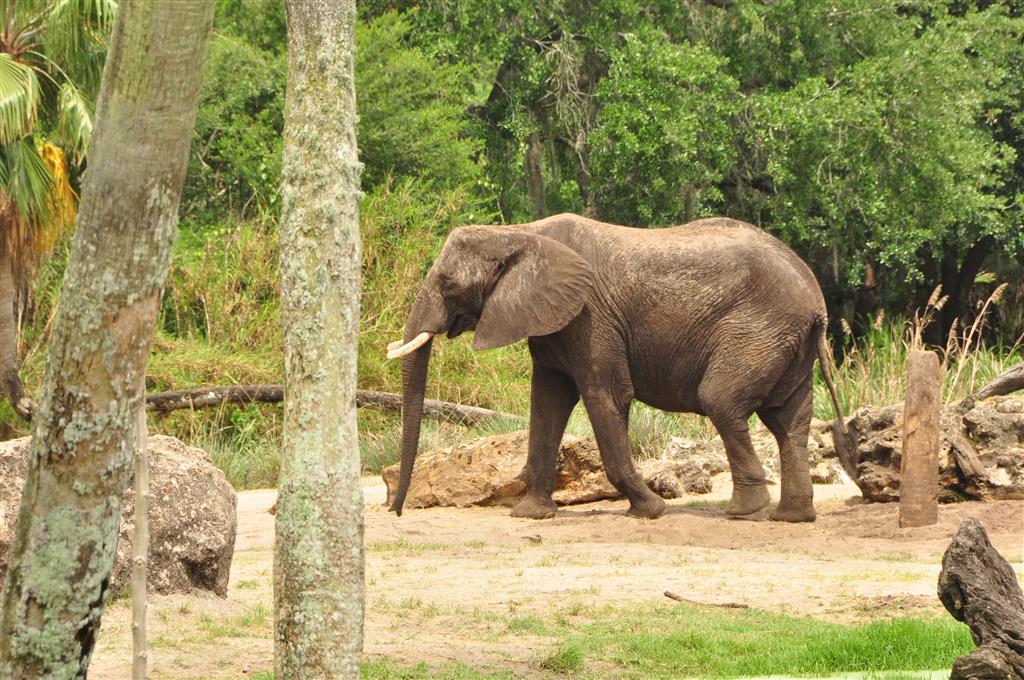 We got insight on how Animal Kingdom discretely feed the animals via artificial tree stumps (very authentic).

It was also explained that the termite mounds throughout the area are “Disney” Real as to not introduce invasive species to the area. 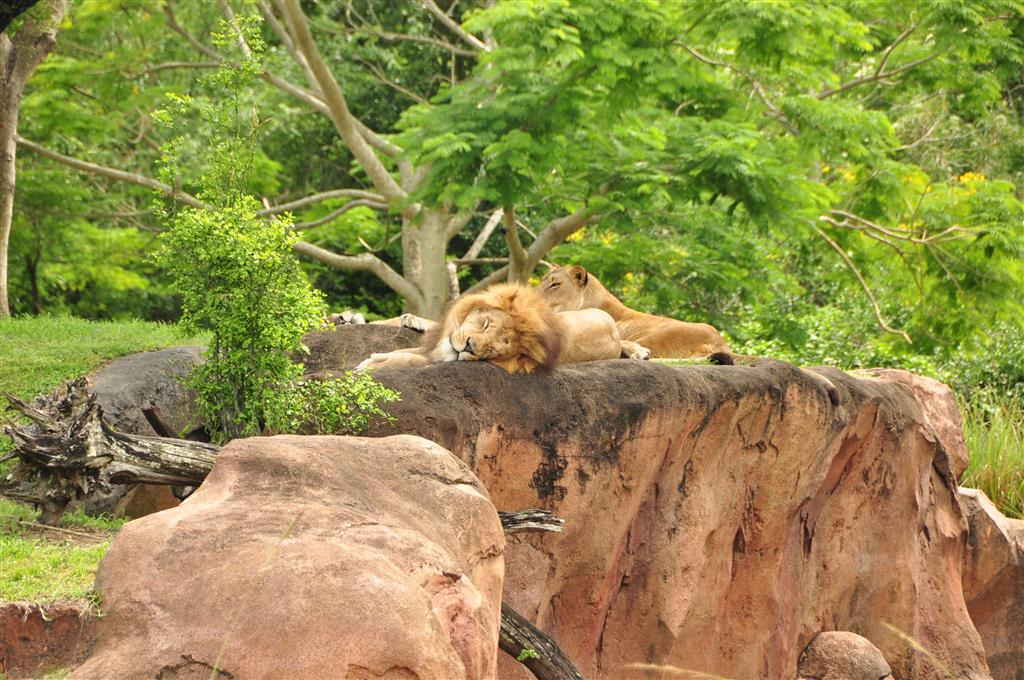 Our Wild Africa Trek would have not been complete without a visit to the big cats, and we got to see the lions relaxing out on a rock as well as 2 groups of cheetahs.

This then lead into a discussion about the conservation efforts that Disney participates in via the Disney Worldwide Conservation Fund and they shared a few of the projects with us like Dogs Saving Cats (Cheetah Project) and the Elephants and Bees project. 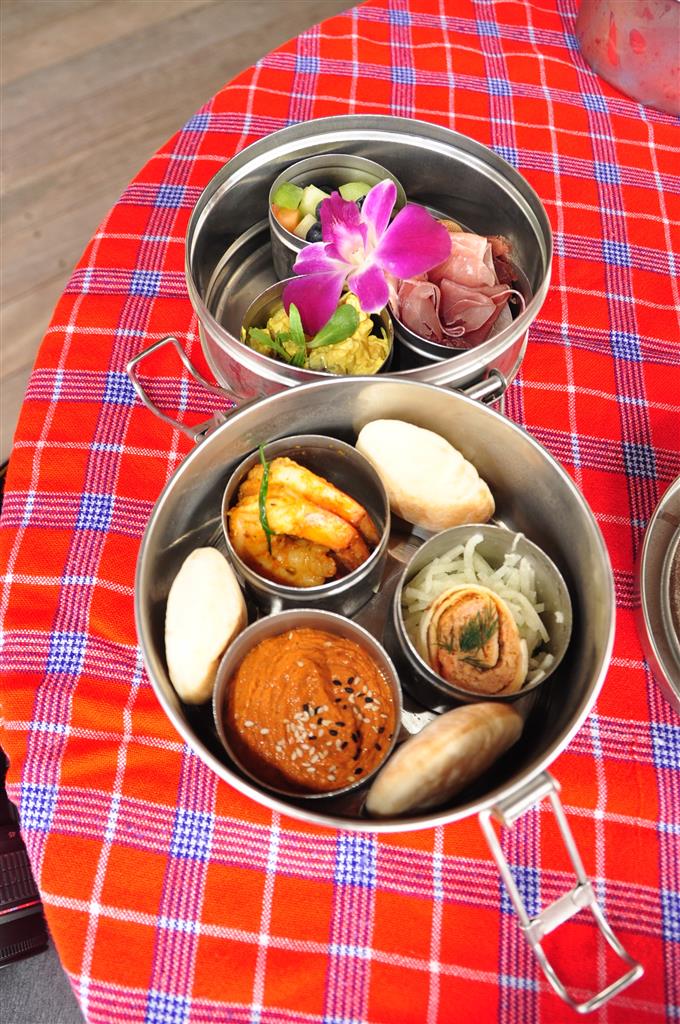 Our day then ended with a beautiful catered lunch that included a flavorful mango juice. In a sampler form, there was curried Chicken Salad, Shrimp, Hummus with dipping bread, Prosciutto and Dried Beef as well as a Fruit Salad. The meal was delicious and full of flavor.

This was definitely an incredible experience, and I am still in awe of all the interesting adventures we went on. To take part in this attraction you must purchase a separate ticket, and children must be 8 years of age or older (accompanied by an adult) and at least 48 inches (122 cm) tall. For pricing and additional details visit Wild Africa Trek. 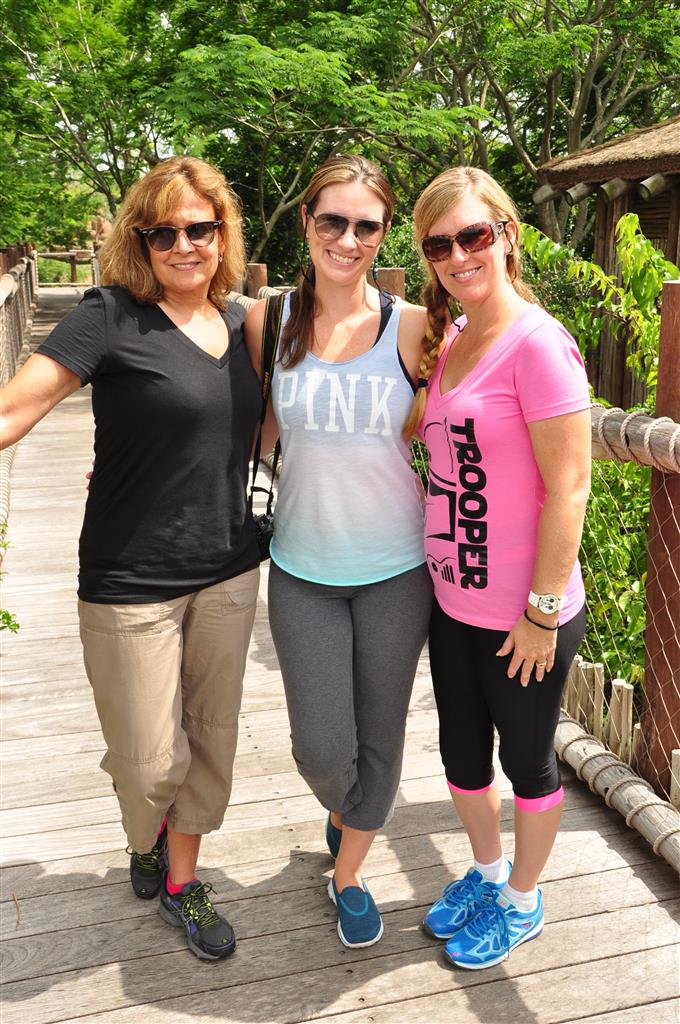