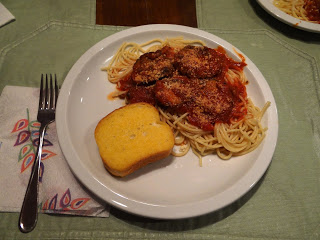 When I went to the U-Pick event last Friday with my daughter, I bought two large Eggplants. Since I really have not cooked with Eggplant, other than the one time I grew two small ones in my Earth Box and fried them up with olive oil, I wanted to try my hand at Eggplant Parmesan.


Now keep in mind, I have never made this, nor have I even looked at a recipe, I just tasted it a couple years ago and from memory figured I would improvise.  FYI, you do not have to be a master chef to make something like this, so you probably won’t be wowed. However, this recipe was really easy to make, fast, inexpensive, and the kids like it (Most important thing since they don’t realize they are eating veggies).


So here is what I needed for the recipe: 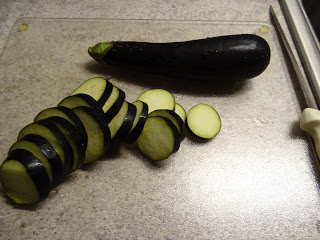 First, I chopped the Eggplant into 1/2 Inch slices.  I then put 3 parts bread crumbs, 1 part Parmesan cheese in a bowl and mixed.  Then I scrambled an egg in a separate bowl.  I turned on the stove to medium high, put a small amount of olive oil in the bottom of a large pan (just enough to cover it). 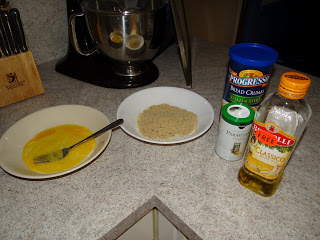 I then dipped all the pieces of Eggplant in the egg, then put them in the Italian Bread Crumbs and cheese mixture until they were covered and then placed them into the pan.  As the Eggplant began to cook, I put the pasta sauce into a pot on medium, and began to boil the water for the pasta. 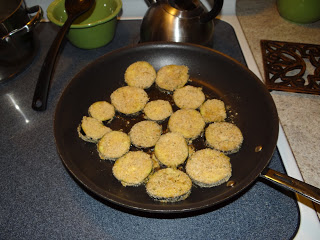 I browned each side of the Eggplant, put the pasta onto cook,  and once the pasta was almost half way done I put the Eggplant directly into the sauce.  Once the pasta was finished, I drained, put onto a plate, put 3-4 pieces of Eggplant with sauce over the pasta, and topped with extra Parmesan cheese. (I served with Garlic Bread)


It turned out delicious and since most of the items I used were bought on a Buy One Get One Free Sale at Publix, this is a recipe that can be made on a budget.


Hope you can put it to good use as well.