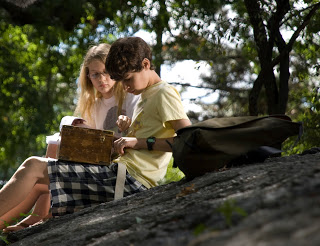 Thanks to Child’s Play Communications and Phase 4 Films, I was sent a Family Friendly Movie called Jeremy Fink and the Meaning of Life to review here on At Home Moma.


This movie, which is directed by Tamar Halpern, and stars Academy Award winner Mira Sorvino and Emmy Award winner Joe Pantoliano, is based on a popular children’s novel by Wendy Mass. The story, which centers around a young man named Jeremy Fink (played by Maxwell Beer), follows Jeremy and his friend Lizzy as they embark on an adventure after he receives mysterious box with the words “The Meaning of Life – for Jeremy Fink to open on his 13th birthday.”  Since the box has no keys, the two set out on a hunt to find them.  Along the way they get into all kinds of mischief, meet interesting people, and eventually find what they are looking for. 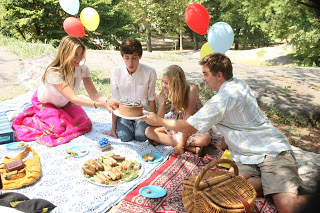 I watched this movie with my almost 6 year old son and 3 year old daughter. They both liked it, and even though it was rated PG, I do not think it was inappropriate for them to watch.  I enjoyed watching the movie as well, and since it has some interesting twists to it, it kept my son’s and my interest.  I do think my son enjoyed watching the antics of the character Lizzy and the character Oswald played by Joe Pantoliano the most, however, some of the content did go over his head.


In my opinion, this movie is geared more towards preteens. The main character is 12 going on 13 and he and his friend, travel around New York City by themselves. In addition, the father of Jeremy has passed away, so that is discussed to some extent and may be a little tough for younger viewers to understand.


This movie is set to be released to the public on DVD, on demand and in digital on March 6, 2012.  It is rated PG with a run time of 88 minutes.  The suggested retail is $29.99 and it contains special features with deleted scenes, bloopers, interviews with the cast, and a digital download of Chapter One as read by the author Wendy Mass.


The learn more about Jeremy Fink and the Meaning of Life visit www.Phase4Films.com or www.facebook.com/phase4films.


At Home Moma did not receive compensation for this post but was provided a DVD for review and information from Child’s Play Communications and Phase 4 Films. The opinions expressed in this post are that of my own.