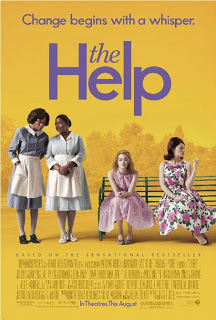 While at BlogHer’11, I was given the opportunity to see an advanced screening of DreamWorks Pictures, “The Help”.

I was completely moved by this picture and by moved I mean, at one point I was laughing and then next thing I knew, I was crying. As a parent many of the scenes shocked me and touched me, and my heart went out to the main characters as they suffered through difficulties.

The film, directed and written for the screen by Tate Taylor, is based on the #1 New York Times best-seller by Kathryn Stockett. “The Help” stars Emma Stone (“Easy A”) as Skeeter, Academy Award®–nominated Viola Davis (“Doubt”) as Aibileen and Octavia Spencer as Minny.

Based in 1960’s Mississippi, the story centers around these 3 characters while they work on a writing project that revels the division of races through the mistreatment of the women who work as the help in White Homes. To write such a story is controversial for those times and puts them all in danger. However, the risks are worth the benefits since it sets a change in motion. In addition to the 3 main characters, the film also stars Bryce Dallas Howard as Hilly, the character you will love to hate.

“The Help” is produced by Bronson Green, Chris Columbus and Michael Nathan and is set to release in theaters August 10, 2011. The movie is Rated PG-13 and run time is 2 hr. 17 min.

If you are looking for a movie that is worthwhile, educational, and moving, you will want to check this out. And, you will definitely need to keep tissue paper nearby because you will use it.

To learn more about the film visit the official site at thehelpmovie.com or Facebook.

At the Advanced screening, I was also provided a goody bag that included a package of tea from The Republic of Tea.

“The Help”, Caramel Cake Black Tea is inspired by the movie and is a blend of traditional black tea with the flavor of homemade caramel. It is packaged in a recyclable, collector’s tin containing 50 all natural, unbleached, round tea bags with a label featuring art from the film.
As I am writing this post, I am actually drinking it, and it is delicious.

This limited edition tea is subject to availability and has a suggested retail price of $9.50. It is available at select gourmet retailers and through the company Web site, REPUBLICofTEA.com, mail-order catalogue and by calling, 800.298.4TEA (832).

After you check out the movie I would love to here your thoughts! And, let me know if you try out the tea.

I was provided a FREE Ticket to the Advanced Screening of “The Help” and a FREE Goody Bag through DreamWorks Pictures. The opinions expressed in this review are that of my own.  Certain information provided in this review is part of a Media Release from The Republic of Tea.