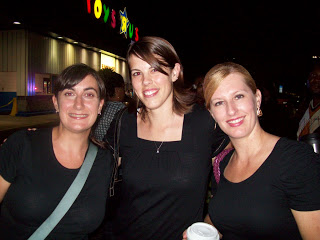 The start of our Black Friday Adventure

This was the first year that I went out at night for Black Friday.  Technically, it was Thanksgiving when we began because my friends, Jessica and Margaret, and I started at the 10:00pm opening at Toys R’ Us.

Thankfully we grabbed some coffee at the Denny’s next door, since we didn’t get into the store until 11:30pm. They were letting us in by 50 people at a time and I’m not complaining since I heard it was really crazy the year before, and this wasn’t bad at all.

I made a list of the things before we went that I hoped to get, but didn’t really worry about whether or not I actually got the stuff. I was really out for the whole Black Friday experience. Well, I ended up getting some really great things.  I picked up the Buy One Get Two Free action figures, the Kids shopping cart for $8.99, Sony DVD’s for $3.99 and Light Sabers for $5.99.  We left Toys R’ Us around 1:30am, so I think we made pretty good time.

After Toys R’ Us we headed to Walmart. They were starting their deals at midnight. I picked up some stocking stuffers there and some cute licensed slippers for kids for $3.99.  We then took a break and headed back to Denny’s for some breakfast.  Apparently we had worked up an appetite after all that shopping, and let’s just say that the late night service was interesting and I’ll leave it at that.

After Denny’s we headed to the Desoto Square Mall and waited for JC Penny’s to open at 4:00am. We all scored the Mickey Snow Globe they were giving away.  They had a great deal on Towels for $2.88 (I went back and got them Saturday all for .79 cents with a $10.00 off coupon), I bought myself a sweater for $9.00, 2 adorable girl’s dresses at 60% off, and I managed to pick up some things for my husband which I won’t discuss since he reads the blog. I ended my time at the mall at Macy’s.

I then went to Best Buy to try to get one of the extremely low priced Laptops. All the tickets were given out so they told me to come back at 9:30 to see if any Laptops were left. I decided to go to Turner’s to get Donuts for the kids and my husband (aren’t I nice) and headed back home. Of course, I am a gluten for punishment, so I put on my work out clothes and headed to the gym. Afterward I went back up to Best Buy to try to get the Laptop.  I waited in line for about an hour and got the $499 Sony package that was in the ad. It had the Karate Kid Blue Ray Disk, extra memory, and a carrying case.

After this good buy, and being awake for 26 hours, I went home and crashed.

So would I do it again? Absolutely.  I am already looking forward to next year.