This is a paid promotion for Ant-Man and The Wasp on behalf of Walt Disney Studios. The Ant Cookies With Quantum Particles were inspired by the movie, and opinions expressed about the film and the items we received are that of my own. 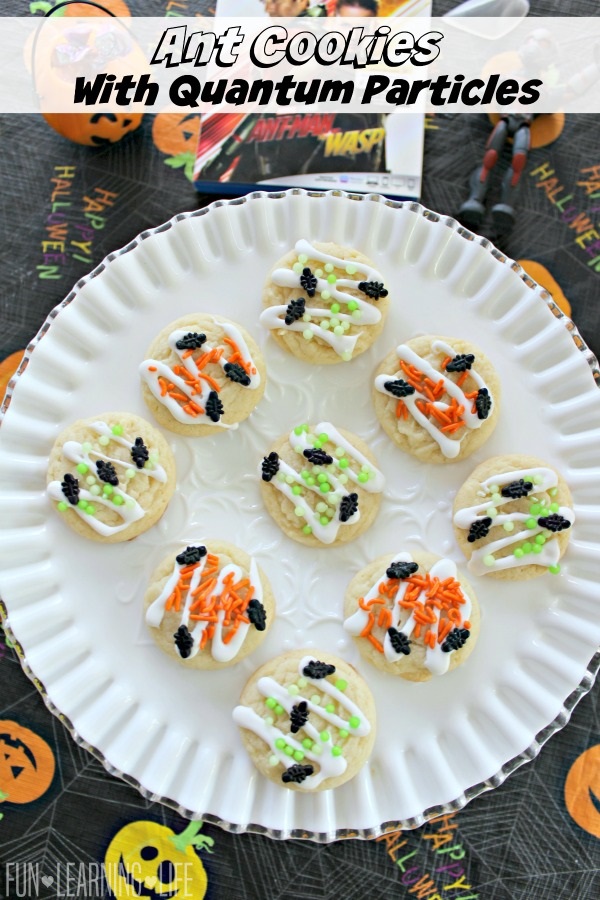 Do you have an upcoming Halloween Party or are looking for a fun dessert for the Marvel Fan in your life? If so, these festive Ant Cookies With Quantum Particles inspired by Ant-Man and The Wasp are great for both occasions.

My kiddos are HUGE Marvel fans, so we actually saw this movie when it initially came out in theatres. So needless to say, I am excited to share that Ant-Man and The Wasp is coming to Blu-ray on October 16th. 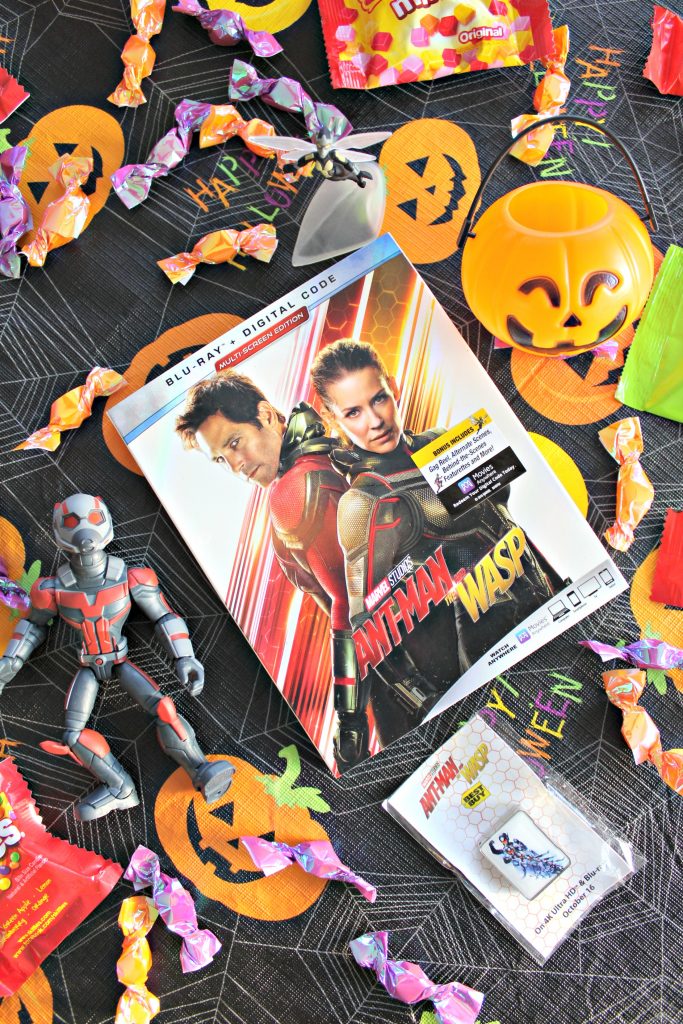 I got an advanced copy along with Halloween goodies, and I have to say that the film is just as funny as it was when we saw it the first time.

Plus, I am happy to add this to our Disney Blu-ray Collection, the kids love playing with the Marvel Ant-Man Action Figure Toybox with Wasp, and we now own a Miniture Steel Book. 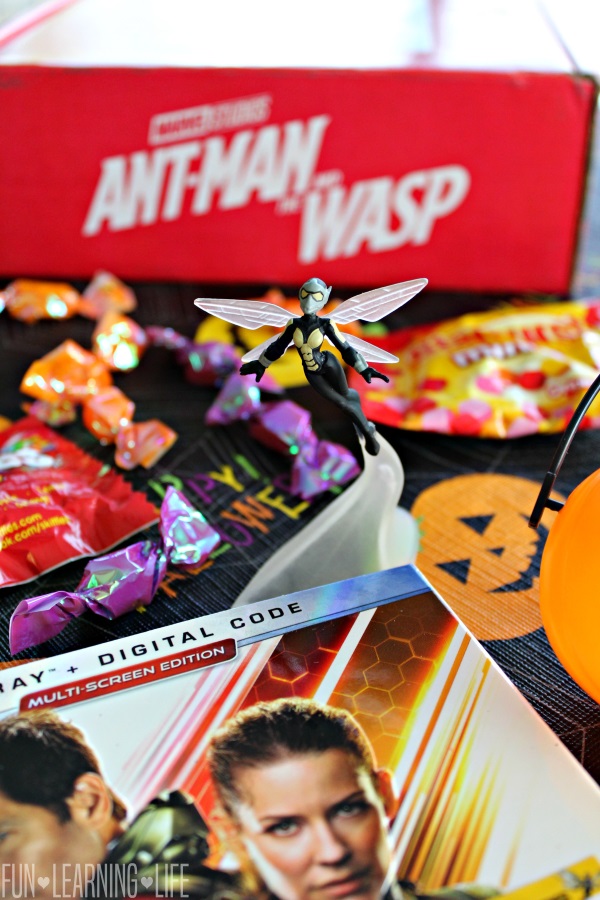 Now if you are looking for fun entertainment for a Halloween Party this film is great for a variety of ages (PG 13).

If you are wanting to make the easy and fun cookies at the top of the page, then check out how I did it below! 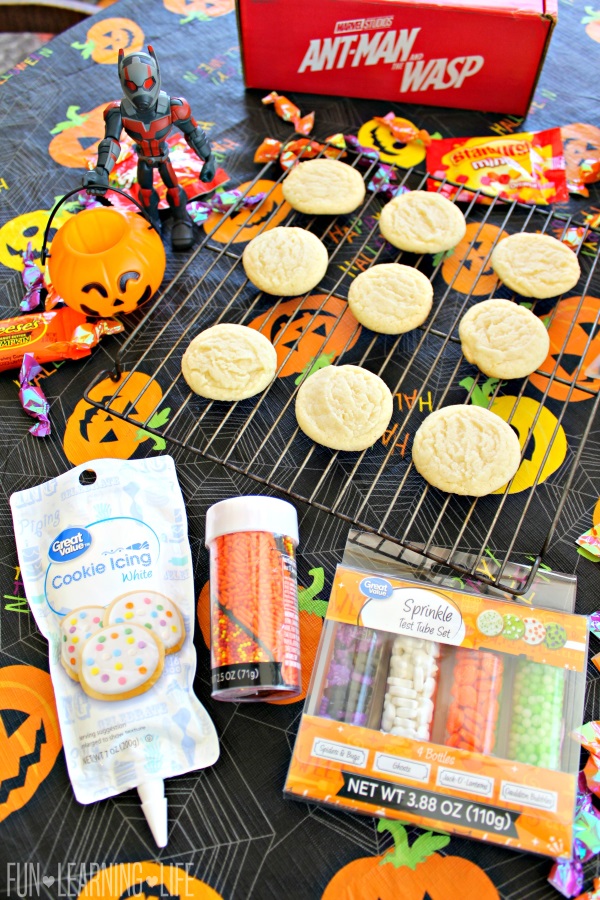 Tip: We found everything that we needed in and near the baking section and celebration aisle of Walmart. If you can’t locate the Ant Candies, I put a link with the Bug Candy Sprinkles at Amazon. 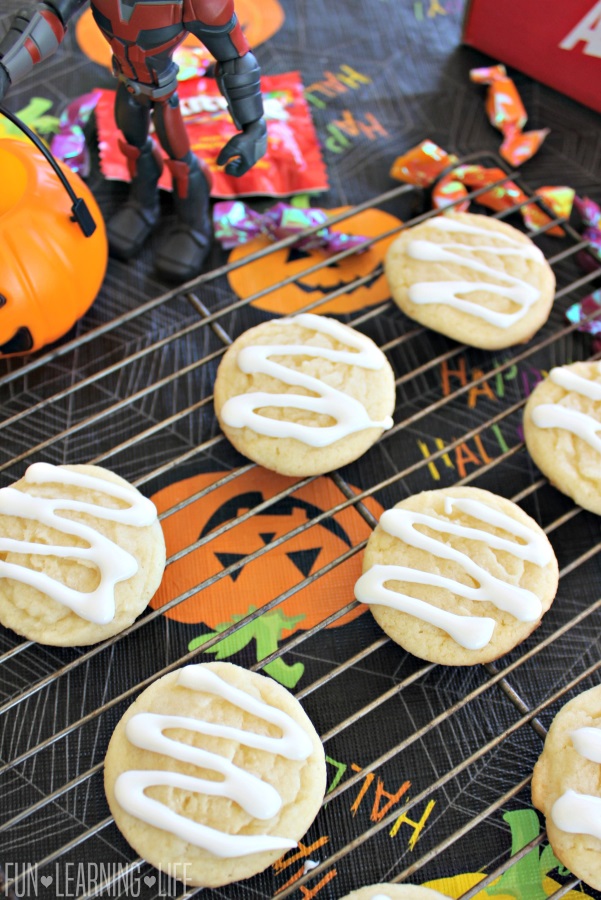 After preparing the sugar cookies according to the packaging or your recipe, allow them to cool on a baking rack.

Then, place streaks of white icing across the tops. 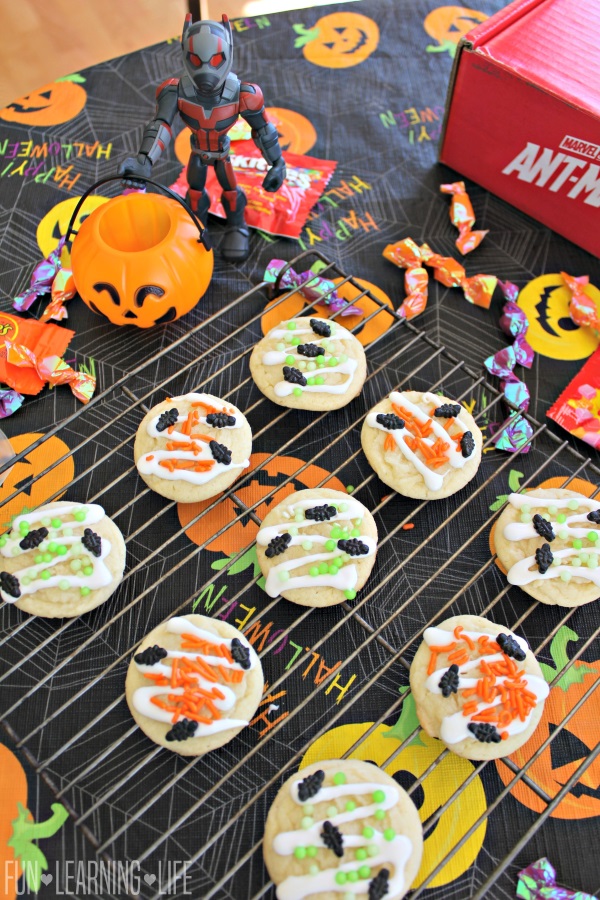 Next, pick your favorite types of sprinkles (AKA Quantum Particles) to place across the top of the icing. Finish by adding the bug sprinkles, allow the icing to set, and then you will be ready to enjoy your Ant Cookies With Quantum Particles!

Looking for other Marvel Inspired Desserts? Check out my Vibranium Popcorn Mix inspired by Black Panther. About Ant-Man and The Wasp on Blu-ray:

In “Ant-Man and The Wasp,” Scott Lang is grappling with the consequences of his choices, as both the Super Hero Ant-Man and a father, in the aftermath of “Captain America: Civil War.” As he struggles to rebalance his home life with his responsibilities as Ant-Man, he’s confronted by Hope van Dyne and Dr. Hank Pym with an urgent new mission to rescue Janet van Dyne from the Quantum Realm. Scott must once again put on the suit and learn to fight alongside The Wasp, all while attempting to serve house arrest, assist fast talking-Luis (Michael Peña) and the X-con Security crew, and thwart the efforts of a new adversary called Ghost (Hannah John-Kamen) and her ally Bill Foster (Laurence Fishburne). 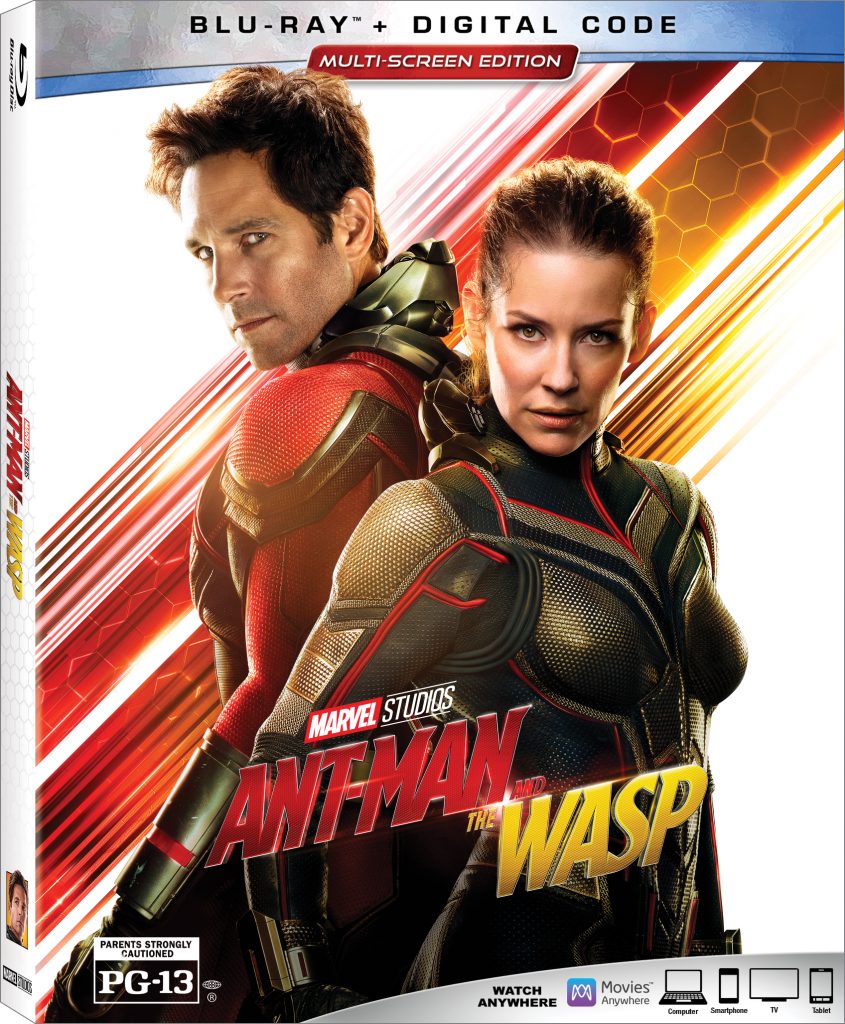 • Director’s Intro by Peyton Reed – The talented creator behind some of Marvel Studios’ funniest and most charming films will invite home audiences deeper into the world of “Ant-Man and The Wasp.”
• Making-of Featurettes:
– Back in the Ant Suit: Scott Lang – Hero and all-star dad Scott Lang keeps the laughs coming for the audience, cast and crew.
– A Suit of Her Own: The Wasp – Highly trained Hope Van Dyne is now the Wasp. See how some of her craziest stunts and action-packed scenes were brought to life.
– Subatomic Super Heroes: Hank & Janet – Hank Pym’s wife Janet was lost in the quantum realm. Trace the legacy of these characters and the iconic actors who portray them.
– Quantum Perspective: The VFX and Production Design of “Ant-Man and The Wasp” – Explore the movie’s visual effects and production design from a whole new viewpoint, in which every micro and macro detail counts.

• Gag Reel and Outtakes – Audiences are treated to the hilarious quips that did not make the film as well as exclusive outtakes from Stan Lee and Tim Heidecker.
– Gag Reel – Join in the fun with these outtakes from the set.
– Stan Lee Outtakes – Stan Lee tries out a series of hilarious one-liners for the scene in which his car shrinks.
– Tim Heidecker Outtakes – Check out Whale Boat Captain Daniel Goobler and his improvised whale-watching riffs.
• Deleted Scenes (with commentary by Director Peyton Reed)
– Worlds Upon Worlds – As Janet leads Hank through the surreal landscape of the quantum realm, they encounter an intelligent life form.
– Sonny’s on the Trail – On the hunt for Hank Pym and his lab, Sonny Burch and his henchmen check the security camera of a neighborhood bookstore. 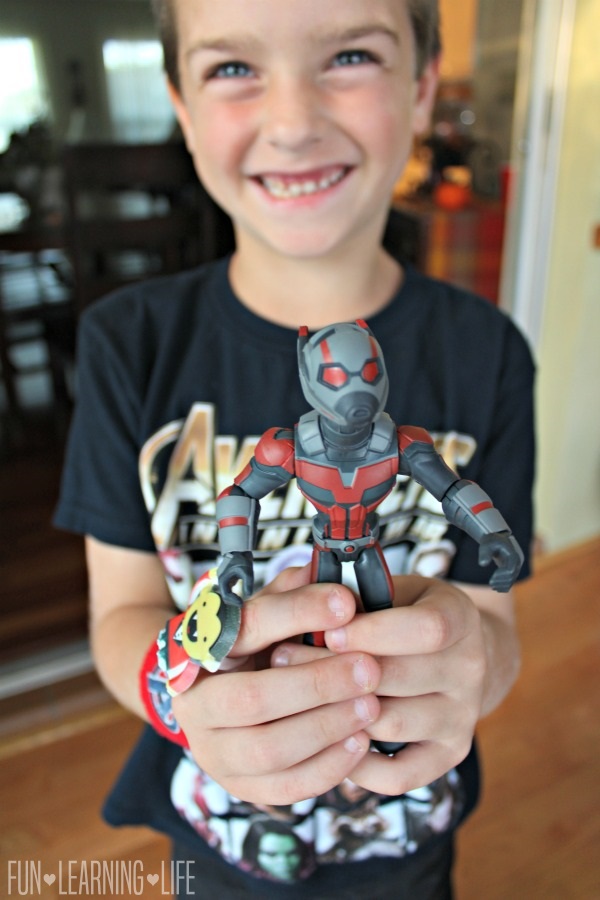 Plus, you earn Disney Movie Rewards with your purchase!

• 10 Years of Marvel Studios: The Art of the Marvel Cinematic Universe – See what it takes to bring the MCU to life, and the role concept artists play in bringing Super Heroes from comic book to screen.
• Online Close-Up Magic University – This commercial will inspire you to expand your mind and maximize your full potential!

Which special feature or features are you looking forward to seeing on the Ant-Man and The Wasp Blu-ray?

For more details about the Marvel Universe visit marvel.com, plus check out Ant-Man and the Wasp on Facebook at Facebook.com/AntMan, Twitter at Twitter.com/AntMan, and Instagram at Instagram.com/Marvel.

Thanks to Disney DVD I have been authorized to giveaway a Ant-Man and The Wasp Blu-ray, a $39.99 Value, to One (1) Lucky Fun Learning Life Reader!

*Participants must be 18 years or older to participate and live in the United States. Odds are based on the number of entries, and by participating, you agree to these terms and the laws set forth by your individual state. Entries will only be accepted through the Rafflecopter Form, and Fun Learning Life is not responsible for disruption of the page or service which could cause problems with entering. The winner will be contacted through email (make sure you check your spam or junk mail) with the Subject line “Ant-Man and The Wasp Blu-ray Winner!”. Shipping information, including email, phone, and address will be collected at that time. The winner has 48 hours to respond, after that an alternate will be chosen, and so on and so forth. Fun Learning Life does not sell personal information. The prize will be fulfilled by the PR Firm. Fun Learning Life does not share information with 3rd parties unless specifically expressed in a specific promotion or giveaway. This giveaway is not associated, nor sponsored by Facebook. Press materials used in this post are copy write ©2018 Disney.