This is a paid promotion for A Wrinkle in Time on behalf of Walt Disney Studios. Opinions expressed about the film and the items we received are that of my own.

We are not participating in many camps this summer, so that means that I am looking for opportunities to keep my kiddos busy here at home.

Of course summer activities like reading, movie days, and hands on crafts are perfect for this time of year and creating themed snacks for the kiddos is also a bonus.

I have already done this a few of these since our vacation began, and part of this was entertaining the kids with a Disney A Wrinkle In Time Blu-ray and activities inspired by the film!

Originally I intended to have a Family Movie Night, but with so many cool activity kits, we were able to enjoy these items over a few days. Now to get started, we first we watched the film.  FYI 3 out of 4 of us had not read the book, so you really don’t need to know much about it to appreciate the story. 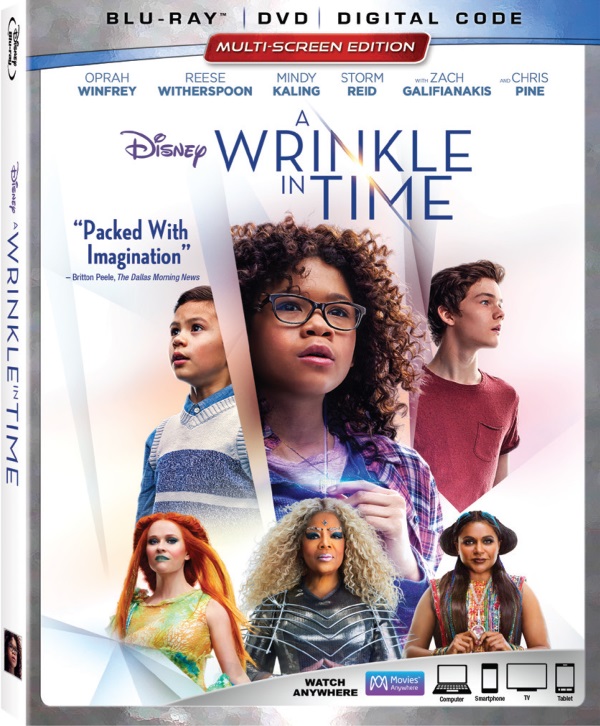 It definitely resonates with young people with it’s magical creatures, comedic moments, and an adventure set forth by kids that they can relate to. Some of the themes represented in Disney A Wrinkle In Time include overcoming bullying, insecurity, caring for family, and the importance of embracing your strengths and loving yourself.

Although I think some of these messages were lost on my 5 year old, my 9 and 12 year old were able to recognize these topics and how they are important in their own lives. As a parent, I appreciated this content and my children really enjoyed the movie. 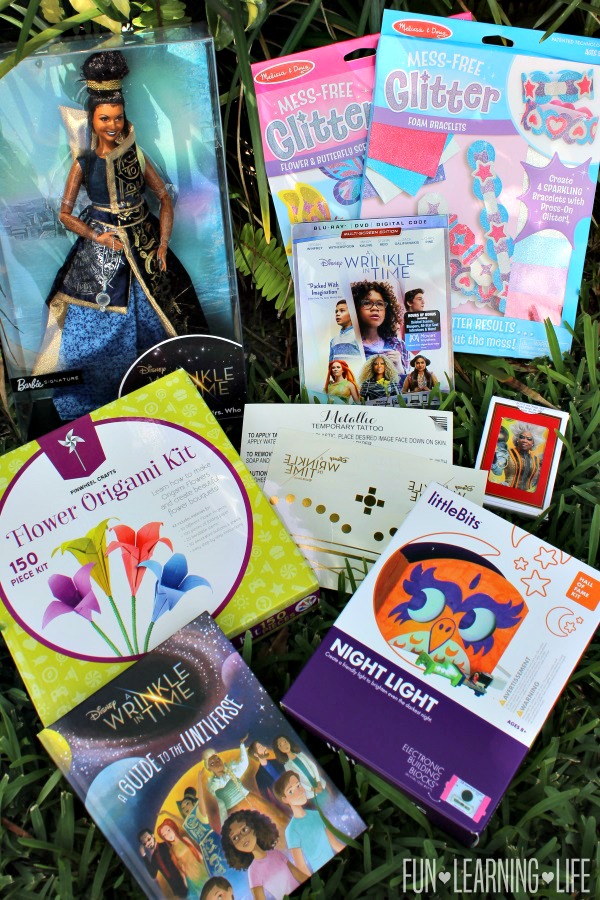 About Disney A Wrinkle In Time:

“A Wrinkle in Time” is directed by Emmy® winner and Oscar® and Golden Globe® nominee Ava DuVernay from a screenplay by Oscar winner Jennifer Lee and Jeff Stockwell based upon the beloved novel by Madeleine L’Engle. The film is produced by Jim Whitaker and Catherine Hand with Doug Merrifield and Adam Borba serving as executive producers, and stars two-time Academy Award® nominee Oprah Winfrey as Mrs. Which; Oscar, Golden Globe and Emmy winner Reese Witherspoon as Mrs. Whatsit; Emmy nominee Mindy Kaling as Mrs. Who; Storm Reid as Meg Murry; Levi Miller as Calvin; Deric McCabe as Charles Wallace; Gugu Mbatha-Raw as Mrs. Murry; Michael Peña as Red; with two-time Emmy winner Zach Galifianakis as the Happy Medium and Emmy nominee Chris Pine as Mr. Murry. 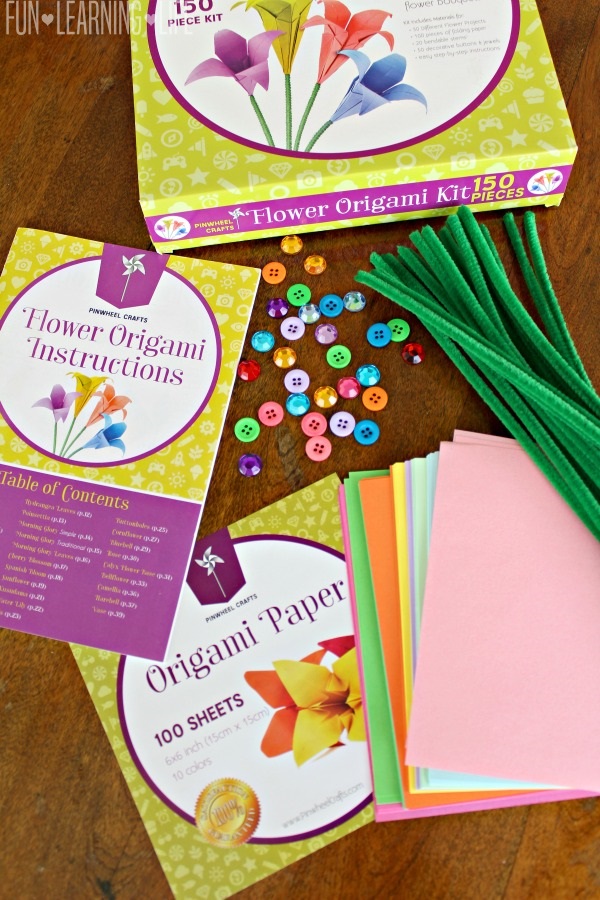 As fantastical as the film’s premise and imagery may seem, “A Wrinkle in Time” centers on a universal human need that feels particularly relevant and relatable today. “This is a story about belonging,” says DuVernay. “It’s about a girl who just doesn’t feel strong in her mind, body and spirit. But through this epic journey, she finds her strength and learns that the center of the universe starts inside her. It’s about Meg feeling like she belongs in the universe and has a mighty part to play… as do we all.”

Check out these Summer Activities inspired by Disney A Wrinkle In Time! 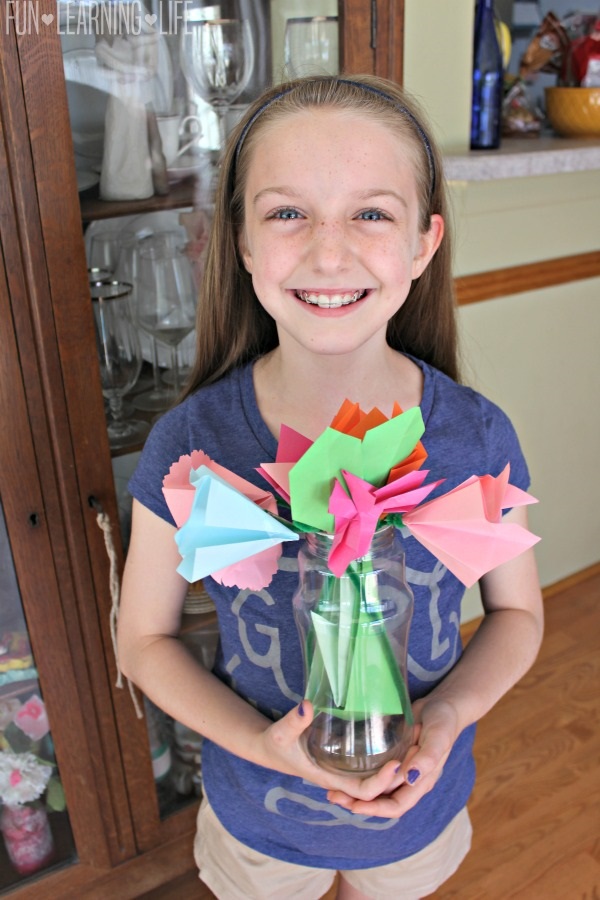 Following step by step directions with a Flower Origami Kit!

My older kiddos embraced their strength of creativity and made a beautiful arrangement of Origami Flowers. These look very similar to the Floral Creatures featured in the film, and my daughter keeps going back to make more. 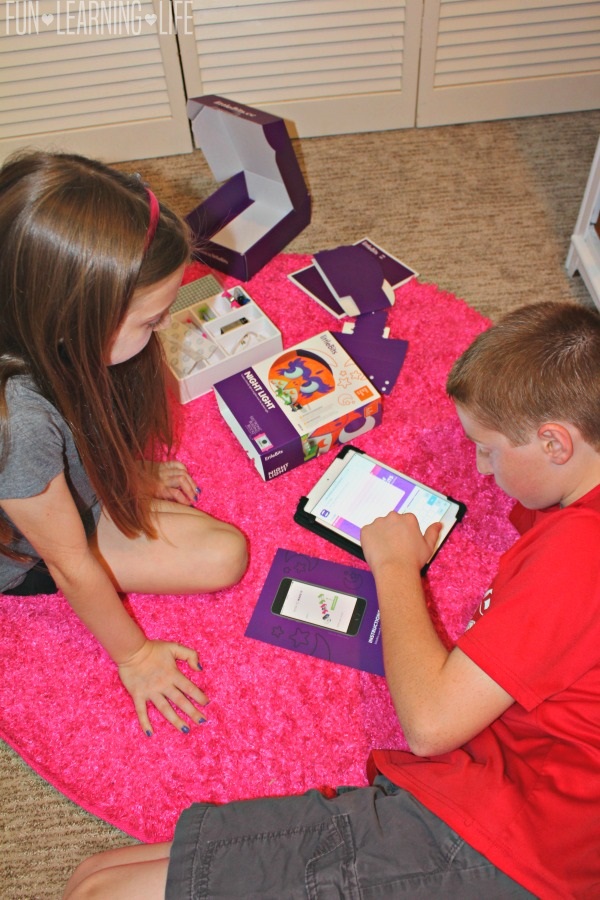 Being engineers to make a Night Light with the LittleBits STEM KIT!

Just like the main character Meg problem solving in the film, the kiddos had to use their skills to assemble a night light. My daughter also threw in her own twist and turned their project into a cat that blinks. 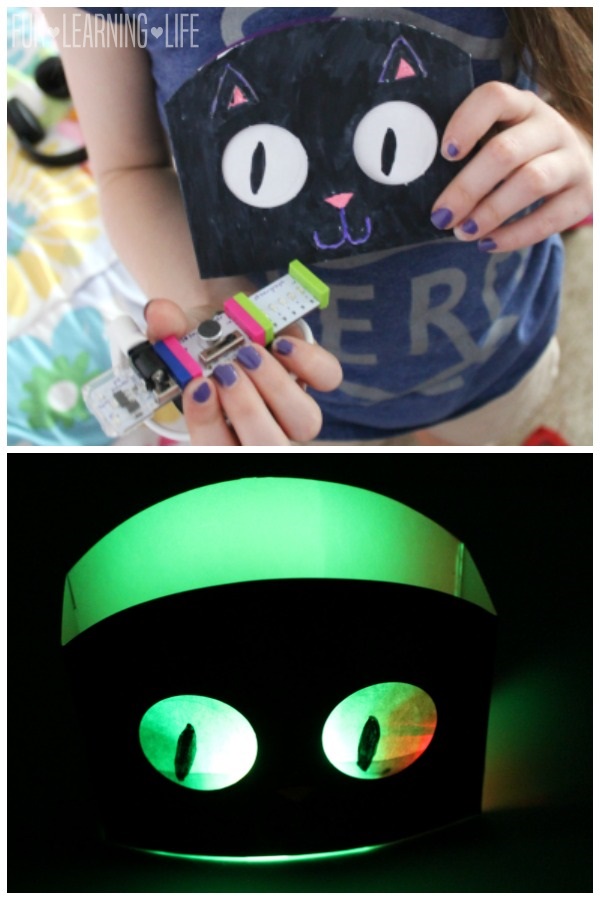 Getting hands on with Mess-Free Glitter Foam Bracelets!

We love to make our own jewelry and now the kids can pretend to be like one of the magical Mrs. in the film. Decorating these bracelets was so simple and there was nothing except for the sticker backs for MOM to clean up. Having quiet time to read A Wrinkle in Time: A Guide to the Universe Book!

The kiddos are keeping reading logs this year and this book is a great addition to our library. Plus, it helps to know the characters in the film even better like this Barbie A Wrinkle in Time Mrs. Who Doll. 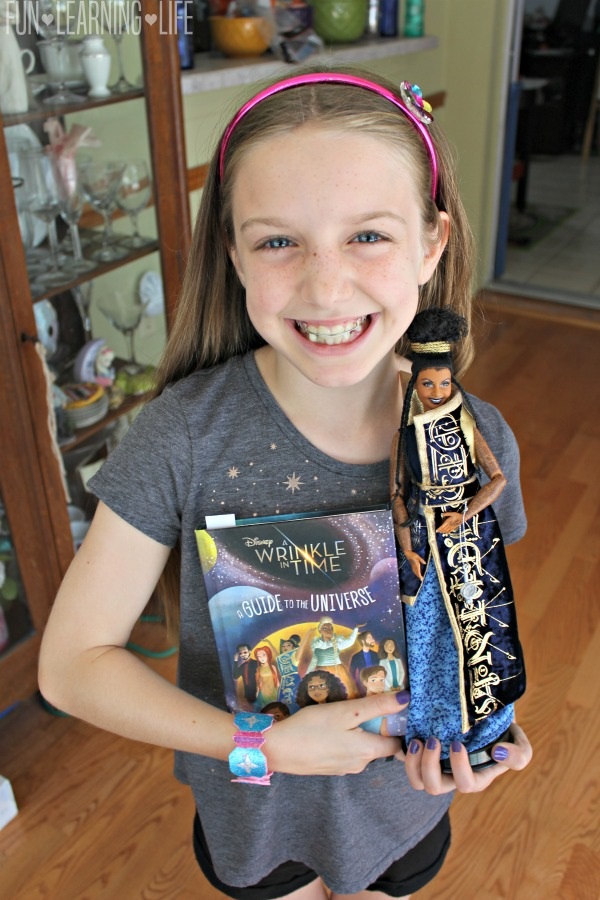 Using Strategy to play games with with Mrs. Which Playing Cards!

All 3 of my kiddos like to play traditional games like Old Maid, Go Fish, and Slap the Jack! I like that this is something that both parents and children can do together. 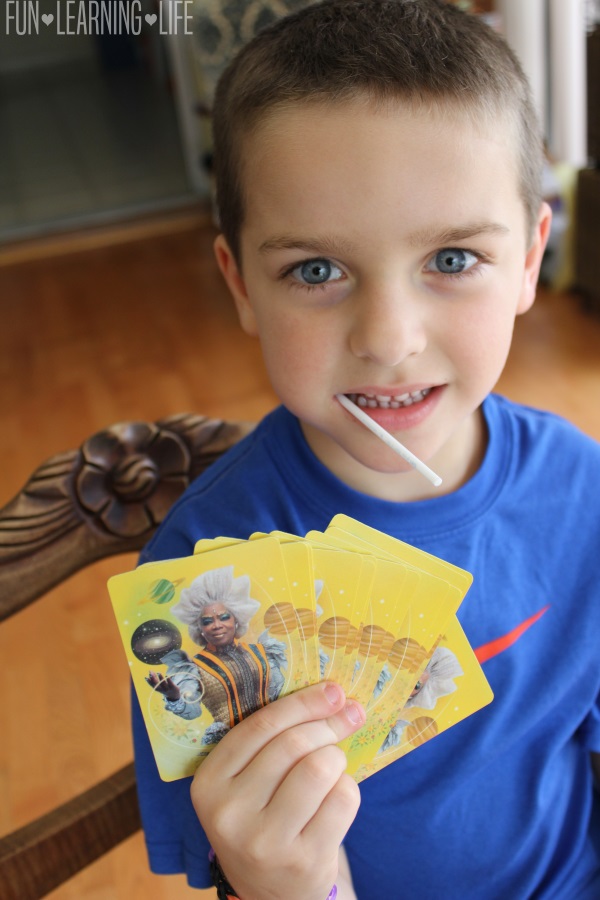 Wanting to make a treat inspired by Meg traveling around the universe? Check out these fun Mini Ice Cream Sandwiches with Star Sprinkles! 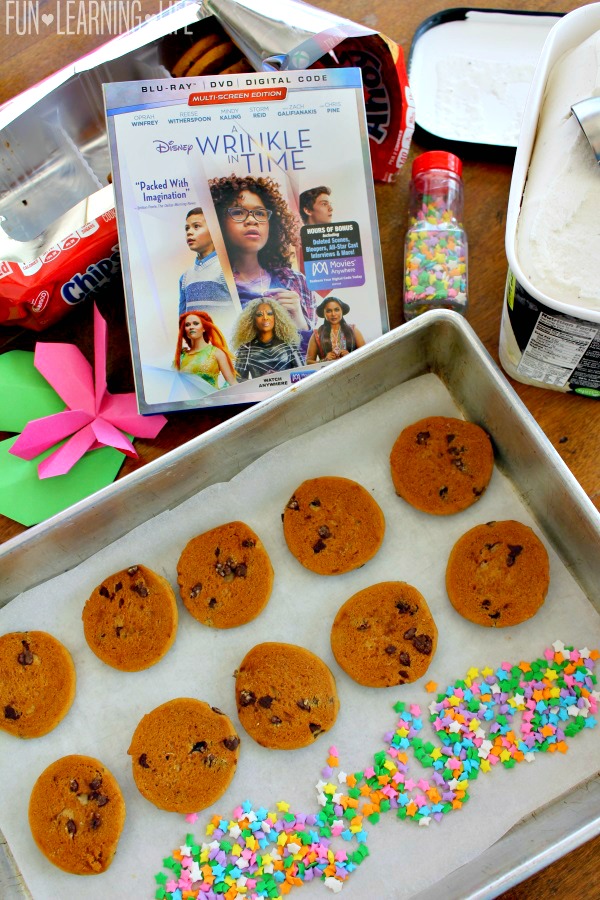 First place a metal pan in the freezer with a piece of Wax Paper until it is cold. Then, take it out and place 2 rows of cookies with star sprinkles off to the side.

Very quickly scoop a small amount of ice cream onto one cookie and place another on top and press down. 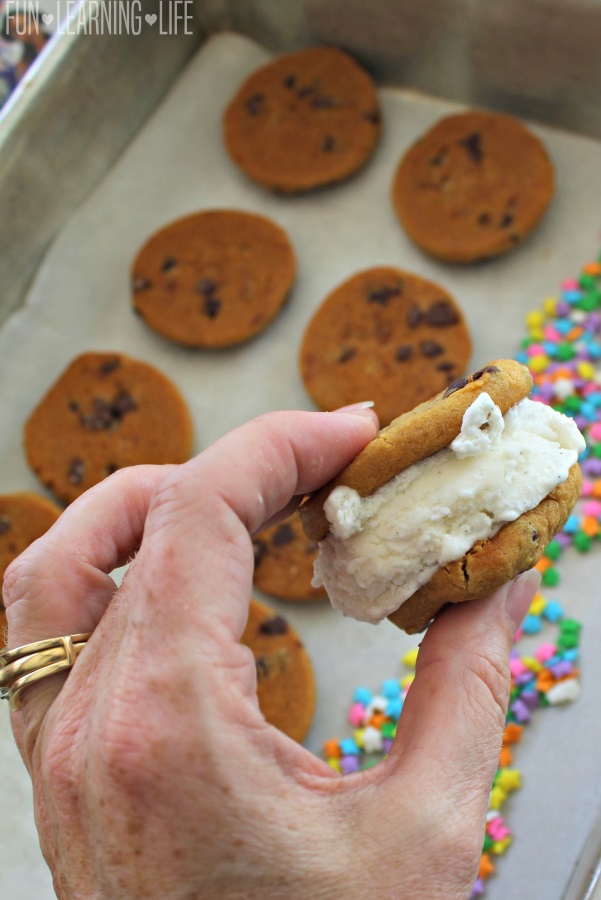 Roll the exposed ice cream into the star sprinkles (you may need to pat them in) and then repeat with all the cookies.

Serve immediately or place the sandwiches back into the freezer to firm back up the ice cream until ready to serve. 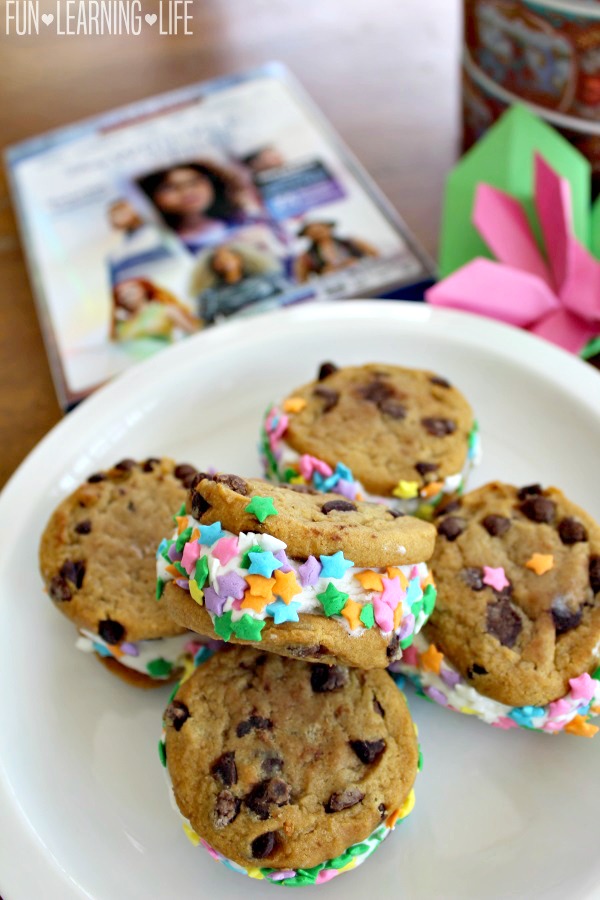 What’s on the Disney A Wrinkle In Time Blu-Ray!

Have you ever read the book “A Wrinkle In Time”? Which one of these summer activities would your family enjoy? 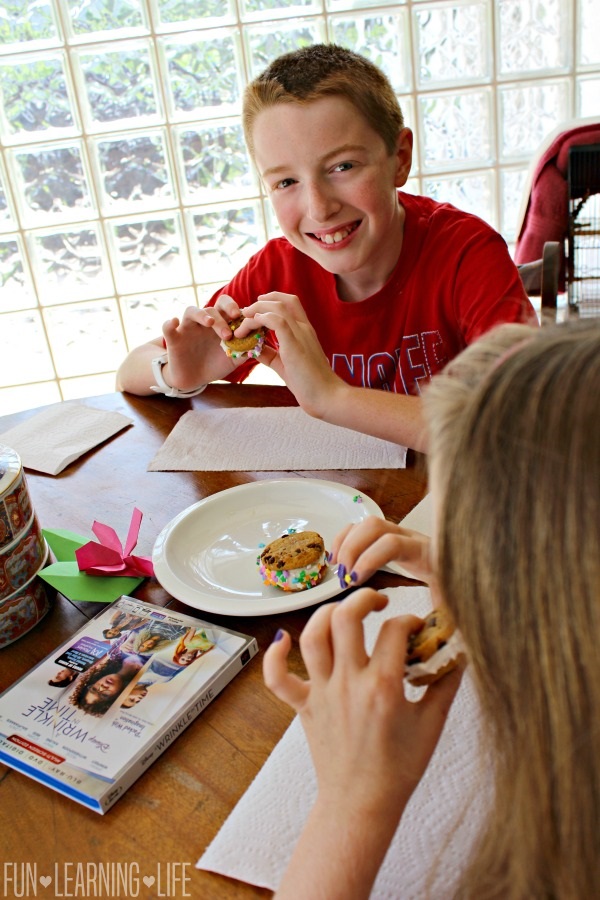 I hope your children enjoy this Disney A Wrinkle In Time Blu-Ray as much as mine did and you get inspired to try out a few of these summer activities as well!

Thanks to Disney DVD I have been authorized to giveaway a Disney A Wrinkle In Time Blu-ray a $39.99 Value, to One (1) Lucky Fun Learning Life Reader!**

**Participants must be 18 years or older to participate and live in the United States. Odds are based on the number of entries, and by participating, you agree to these terms and the laws set forth by your individual state. Entries will only be accepted through the Rafflecopter Form, and Fun Learning Life is not responsible for disruption of the page or service which could cause problems with entering. The winner will be contacted through email (make sure you check your spam or junk mail) with the Subject line “Disney A Wrinkle In Time Blu-ray Winner”. Shipping information, including email, phone, and address will be collected at that time. The winner has 48 hours to respond, after that an alternate will be chosen, and so on and so forth. Fun Learning Life does not sell personal information. The prize will be fulfilled by the PR Firm. Fun Learning Life does not share information with 3rd parties unless specifically expressed in a specific promotion or giveaway. This giveaway is not associated, nor sponsored by Facebook. Press materials used in this post are copy write ©2018 Disney.