I had an opportunity to see an advanced screening of Beauty of the Beast. A special thank you goes out to Walt Disney Studios for providing press materials as well as sponsoring my trip and accommodations to the Be Our Guest Event. Opinions expressed are that of my own.

While in Los Angles as part of a press junket, I got an opportunity to see BEAUTY AND THE BEAST as well interview the cast and crew. Now in advance I will tell you that I have always been a fan of the original movie and I share this love of the story with my kids. I even sang the medley with my high school choir, so I truly have an appreciation for the music in this film.

As a note to parents, the film is rated PG so I really feel like it is up to your discretion as to what you think your child can watch. However as a benchmark, I would take my 4 year old to see it because he has watched all of the Star Wars films. The only thing I would caution for younger viewers is, there is reference to the death of both the Beast’s and Belle’s Mom in 2 scenes, the Beast can be a little scary when he roars, and the fight scene at the end of the film is a bit intense.

So after watching the film and completely enjoying it, here are 5 Reasons To See Beauty and The Beast With Your Family!

Just like Emma Watson had revealed in a recent interview, “People ask me a lot, what’s it like being a Disney princess? and I go,’Well actually, Belle isn’t a princess’”. I love that Belle is the inventive one in this movie and isn’t always the one needing to be saved. She is the one who takes the place of her father in the Beast’s jail cell, she is the one who helps bring the Beast back to good health when he is hurt, and she is also the one who helps facilitate change in the Beast’s life. 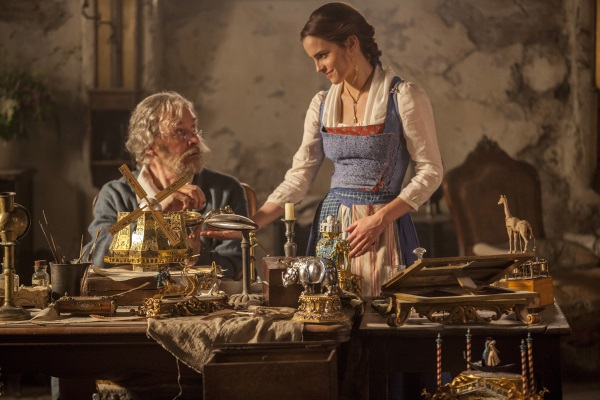 Luke Evans also explained, “If it wasn’t for her, this story wouldn’t have the backbone that it does it comes from a very fearless, independently spirited young woman who reads, who’s intellectual, who wants to learn.”

Likewise, you will see an Opera Singer in Madame Garderobe who defends her home, as well as a Mother (Mrs. Potts) accepting responsibility for failures as well as doing what she can to help restore the lives of her friends and family. I love that these are characters that both my sons and daughter can look up to. 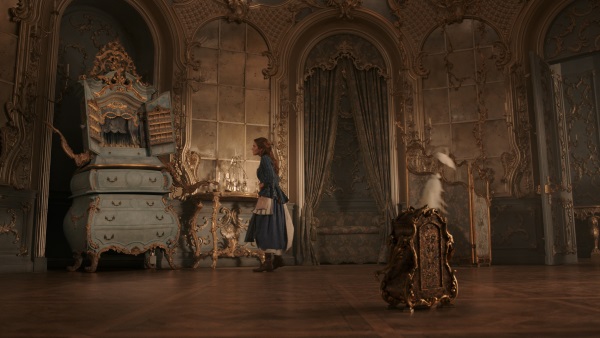 2. The Costumes, the Set Designs, and the CGI-

I want to see this film again, just so I can take in all of the details. Can I just say that I am still in awe of the opening scene of the movie. The dresses, the dances as well as the decor of the castle really transports you back to the Era. Plus how Belle’s Iconic Dress was reimagined as well as the Beast and the Objects (Lumiere, Mrs. Potts, Cogsworth, Plumette, etc.) was all quite magical. 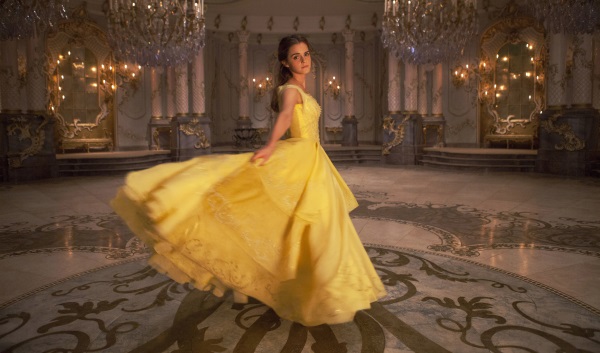 Dan Stevens gave us the details, “… I spent the whole time as the Beast in a forty pound muscle suit on stilts covered in gray Lycra.  I looked pretty odd, but nothing like the Beast that you see in the movie.”

Furthermore, you will see costumes reminiscent of the original animation like the Beast’s Jacket, Belle’s Blue Dress, and Gaston’s red accents on his clothing. 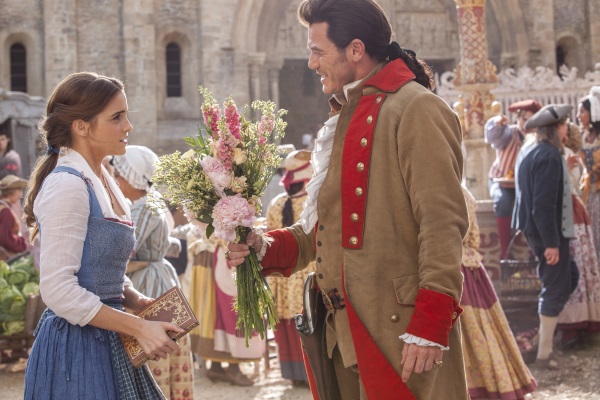 3. New Songs in BEAUTY AND THE BEAST –

I can tell you that I loved hearing the original tunes such as “Beauty and the Beast”, “Something There” along with Ewan McGregor’s “Be Our Guest”. As for laughs, all I can say is audiences will totally enjoy Josh Gad’s and Luke Evan’s rendition of “Gaston”. 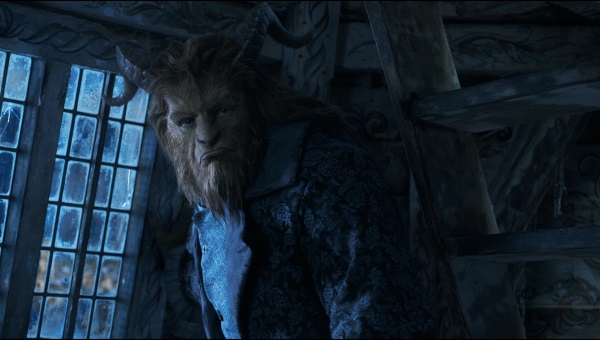 However, I also welcomed the new songs including “How Does A Moment Last Forever” and the Beast’s song called “Evermore”. Plus, I will admit to crying during the Cast Ensemble of “Days In The Sun” and since you get more background on both the Beast and Belle in this film, it really resonates with the story. I will definitely be purchasing this soundtrack. 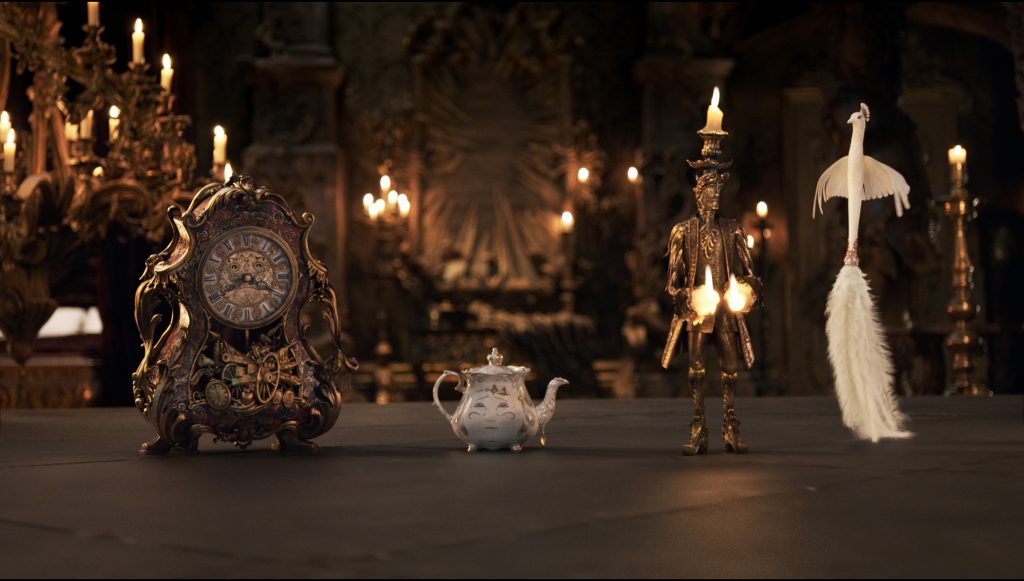 4. The Lessons and Messages –

Just like the original, this film is all about not judging a book by its cover. This lesson is something that I try to convey to my children and as they have grown, I can see such a great empathy in all 3 of them. 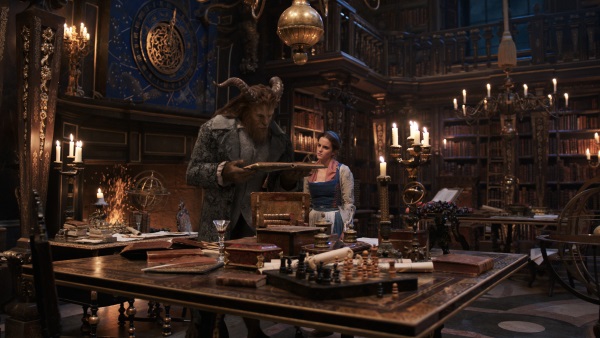 In addition, there is a wonderful theme of love throughout. You see the love of Belle for her father, the love of the Objects for one another, as well as the idea of loving oneself. You also see a character stand up for what is right because he respected and began to love himself.

Audra McDonald shared her hopes for the film, “Yes, there’s always the love conquers all, love wins and it’s not about just giving the love but loving yourself too.  I think that’s what’s so important and realizing that what you have inside of you is most important and not the outside doesn’t necessarily matter.  I’m sure that’s what people are gonna take away from this.” 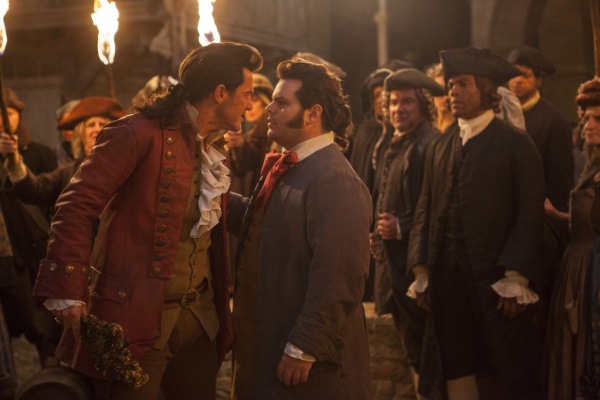 I spent a lot of time as a child with grandparents who exposed me to musicals like “West Side Story”, “Oklahoma”, and “The Sound of Music”. This lead me to act as a teen and participate in my school’s choir. 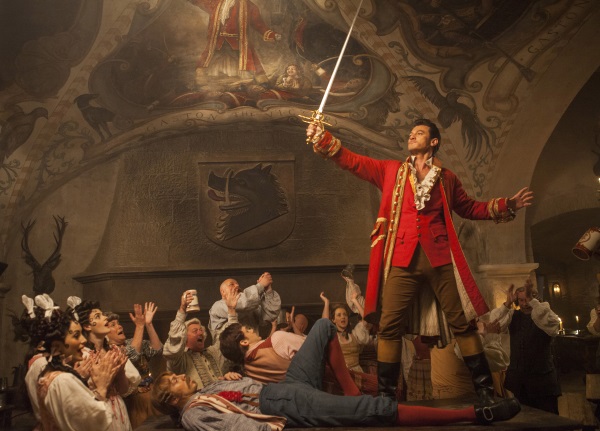 Josh Gad revealed to us, “…I can’t think of a big screen musical, live action, that my kids have seen on the silver screen in their lifetimes. That is unacceptable to me coming from musical theater. We’re not gonna take ‘em to MOULIN ROUGE, we’re not gonna take them to  LES MIS. You can’t take ‘em to NINE. This is gonna be for many of your kids and my kids certainly, the first time they ever see a musical screen that isn’t animated. That’s huge.”

As a parent it is important for me to expose my kids to a variety of subjects and the arts is such a huge part of this. Plus I must admit that it is a lot of fun to sing together as a family. 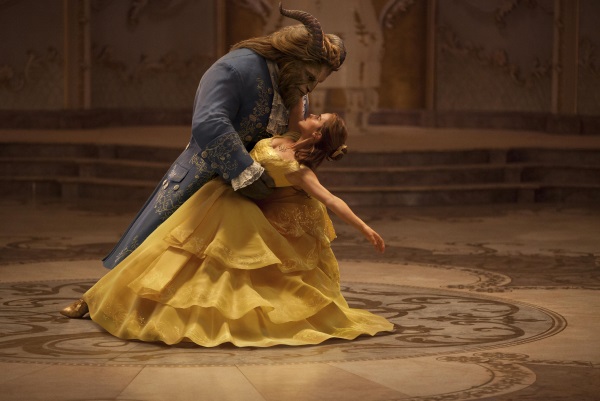 As you can tell, this really is an amazing film and I hope these insights give you a window into the story. I know can’t wait to take my kids to see it !

ABOUT DISNEY’S BEAUTY AND THE BEAST:

The story and characters audiences know and love come to spectacular life in the live-action adaptation of Disney’s animated classic “Beauty and the Beast,” a stunning, cinematic event celebrating one of the most beloved tales ever told. “Beauty and the Beast” is the fantastic journey of Belle, a bright, beautiful and independent young woman who is taken prisoner by a Beast in his castle. Despite her fears, she befriends the castle’s enchanted staff and learns to look beyond the Beast’s hideous exterior and realize the kind heart of the true Prince within.

The film stars: Emma Watson as Belle; Dan Stevens as the Beast; Luke Evans as Gaston, the handsome, but shallow villager who woos Belle; Kevin Kline as Maurice, Belle’s father; Josh Gad as LeFou, Gaston’s long-suffering aide-de-camp; Ewan McGregor as Lumière, the candelabra; Stanley Tucci as Maestro Cadenza, the harpsichord; Audra McDonald as Madame de Garderobe, the wardrobe; Gugu Mbatha-Raw as Plumette, the feather duster; Hattie Morahan as the enchantress; and Nathan Mack as Chip, the teacup; with Ian McKellen as Cogsworth, the mantel clock; and Emma Thompson as the teapot, Mrs. Potts.

BEAUTY AND THE BEAST OPENS IN THEATRES EVERYWHERE TODAY!

A special thank you goes out the Walt Disney Studios for providing this information and materials about Beauty and the Beast.