A special thank you goes out to Disney for providing me with travel, accommodations, and this Private Tour of the Walt Disney Archives. Opinions expressed are that of my own. 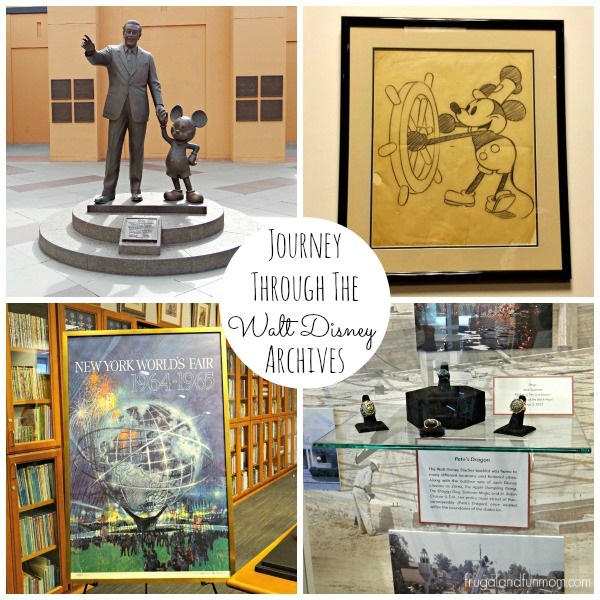 Imagine taking a trip through time and seeing where it all began with the Walt Disney Legacy. You can actually do this when you visit the Walt Disney Archives located in Burbank California.

While visiting the area as part of the TOMORROWLAND Movie Event, myself and 24 other bloggers got an opportunity to tour this facility located at The Walt Disney Studios in the Frank G. Wells Building. 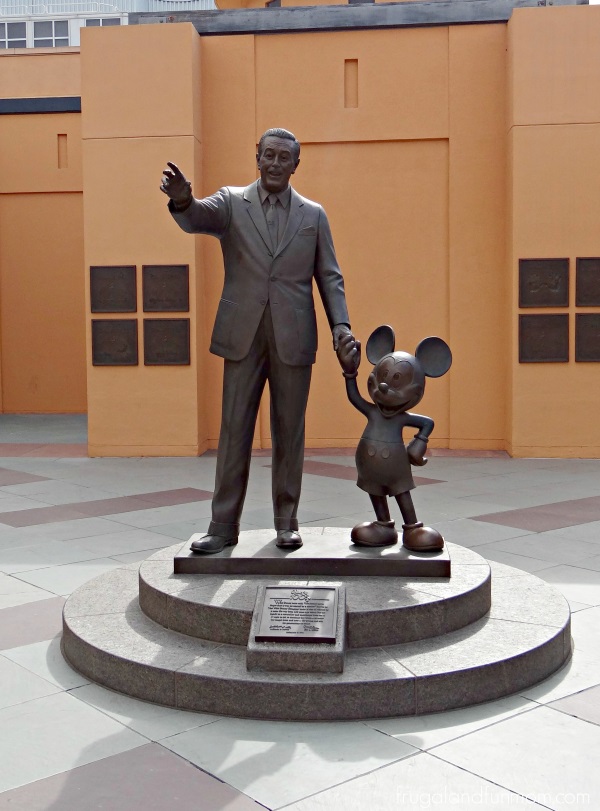 Now before we even entered the Archives we first walked around the studio and came across beautiful landmarks on the grounds.

There was a well known statue of Walt along with Mickey, a spectacular building with the Seven Dwarfs, as well as a Hall with the Names and Hand Prints of Disney Legends. 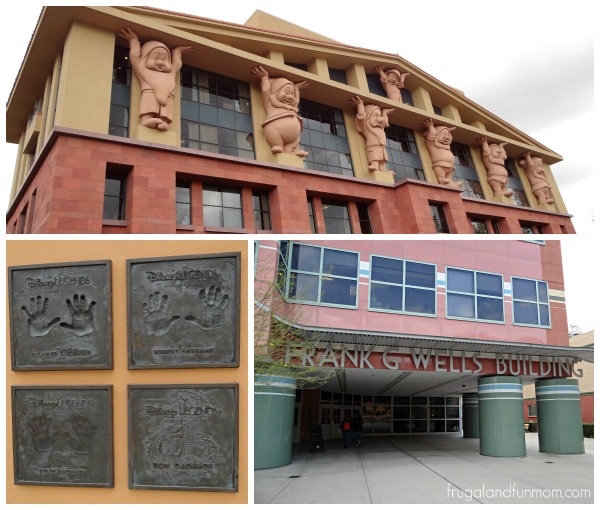 After touring the outside, it was then time to take a journey through the past to the present at the Walt Disney Archives.

Our guide for the day would be a very informed Archivist named Kevin M. Kern. He began to fill us in on the history of this museum and what items are housed there. 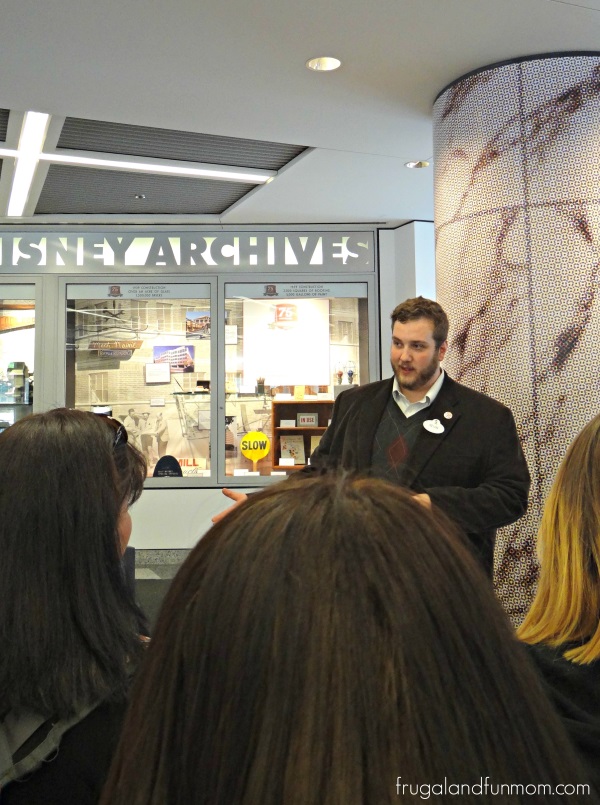 We first walked around the main area and looked at display cases containing memorabilia such as Annette Funicello’s Mouse Ears. 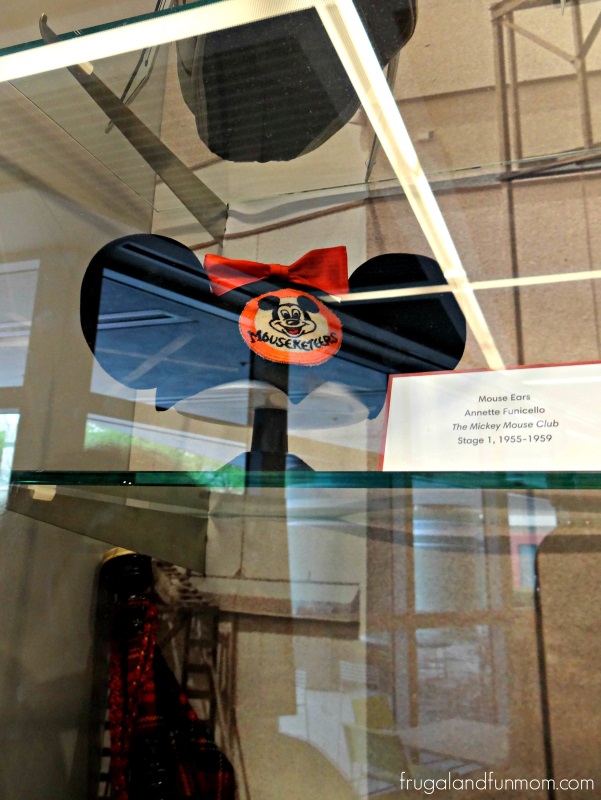 We also saw Captain Jack Sparrow’s Rings worn by Johhny Depp in Pirates of the Caribbean, memorabilia from 20,000 Leagues Under the Sea, and an original animator model for Captain Hook. 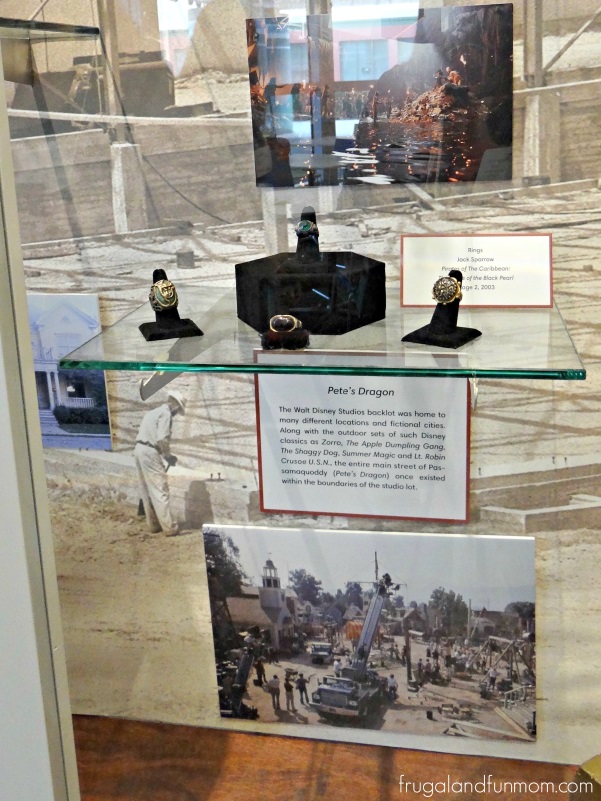 We then discussed the 75th Anniversary of Walt Disney Studios. In a few of the display cases, there was information about this historic event along with original signage and items from Walt Disney’s Office. 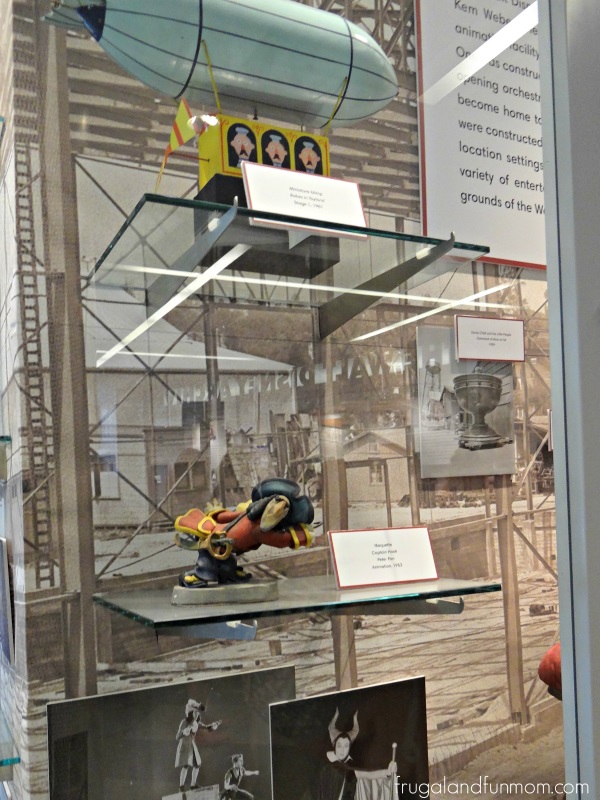 One of the coolest things I saw while touring the Archives was a Multiplane Camera used in Snow White and the Seven Dwarfs. This device was high tech for it’s time and was used to create depth in animation.

The last Disney film to use this type of Technology was Oliver and Company. 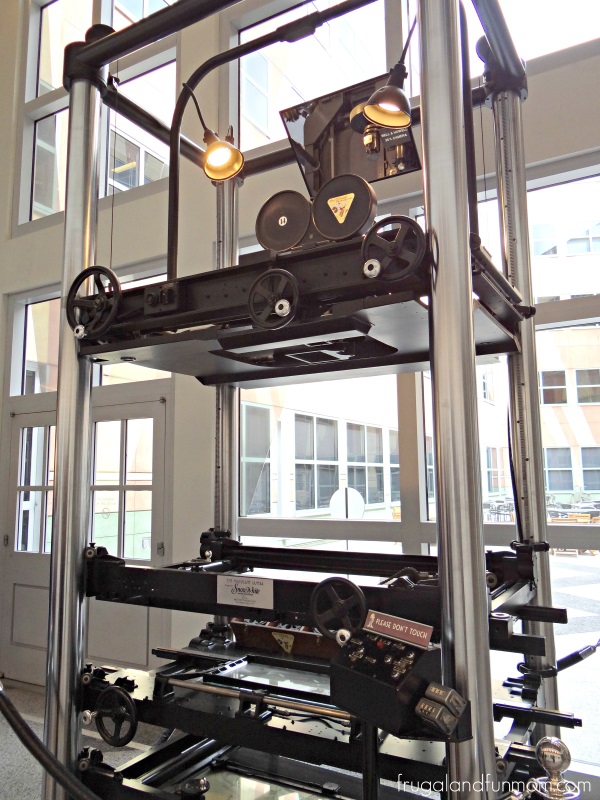 It was then time to go even further behind the scenes to see a more up close and personal view of items from the Archives.

We went into a room filled with display cases, books, and photos. I must admit that the most breathtaking moment for me was seeing the photo of Steamboat Willie. Such an amazing piece of history. 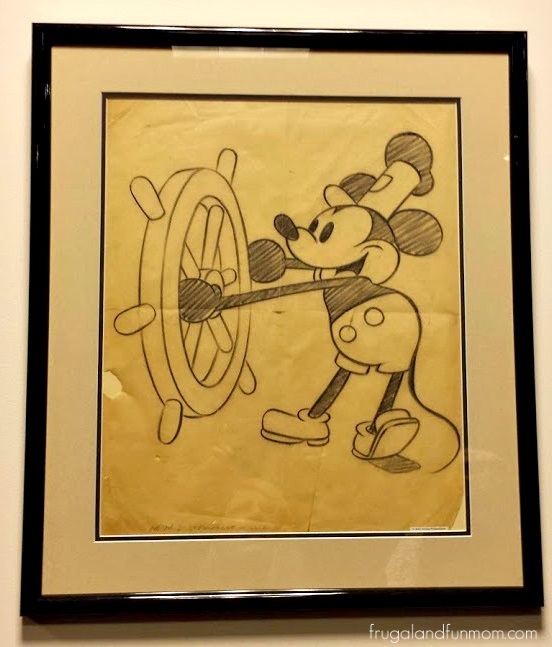 In a corner, there was also an animator’s desk with original drawings, from there I saw an iconic black and white photo of Walt himself, and old figurines paired with a very cool Mickey Watch in it’s original box.

It was in this room that I was educated on the Academy Awards that the Studio had on display. Did you know that Walt Disney personally won 32 of these, more than any other individual? That is so amazing. 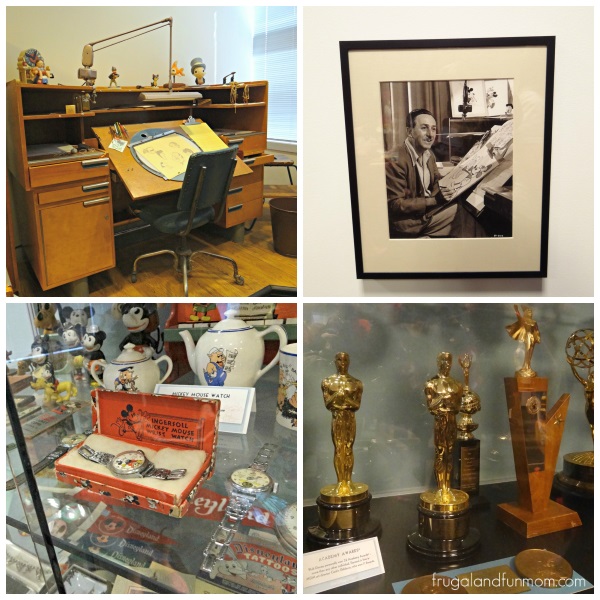 Since we were there to check out the inspiration behind the film TOMORROWLAND, we then took a look at items from the 1964-1965 World’s Fair.

We also got to see the first Disneyland Ticket, as well as press Tickets from Disneyland. 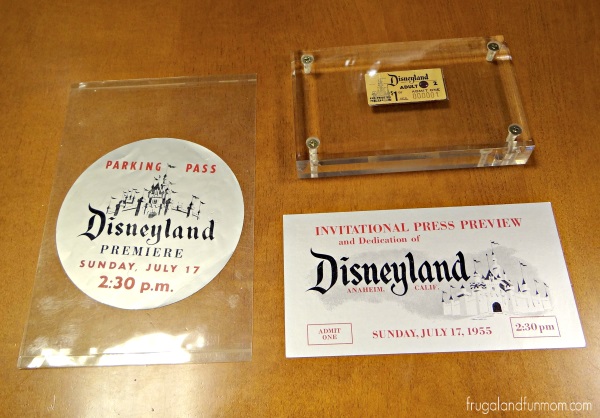 You will also notice the famous blue and orange pin used by Casey Newton in the film.

Just because an item is new doesn’t mean that it doesn’t belong in the Archives.  This item is now part of Disney’s new history. 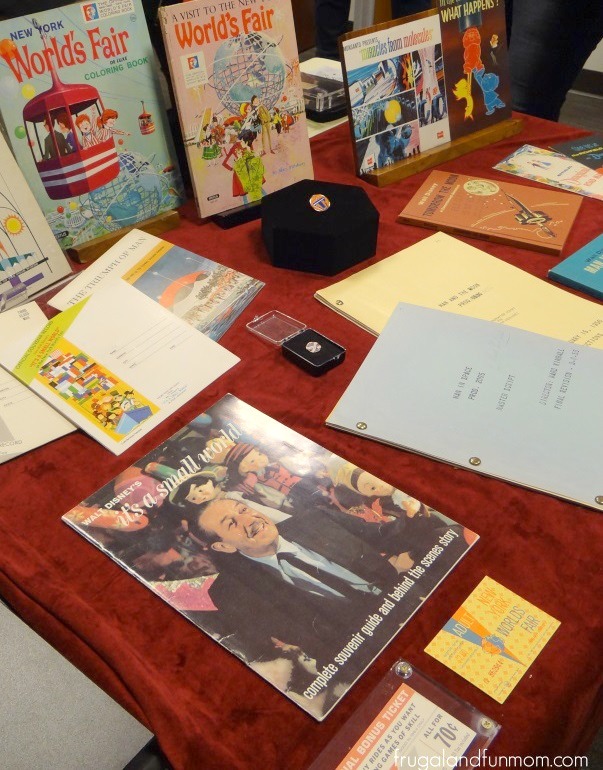 Visiting the Walt Disney Archives was such an amazing experience and is something that I can share with my children and even my grandchildren.

This place protects items that have made an impact on cinematic history and most likely will be referenced for an eternity. For more information about the Studio and Archives visit Walt Disney Archives. 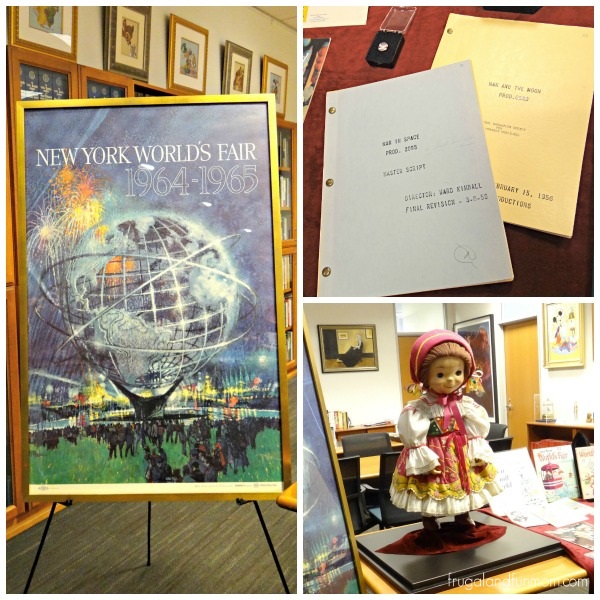 After seeing the photos from the Walt Disney Archives are you intrigued by the film TOMORROWLAND? Who in your family will you be taking to see this movie?