I was provided press passes to SeaWorld Orlando to facilitate this post. Opinions expressed are that of my own. 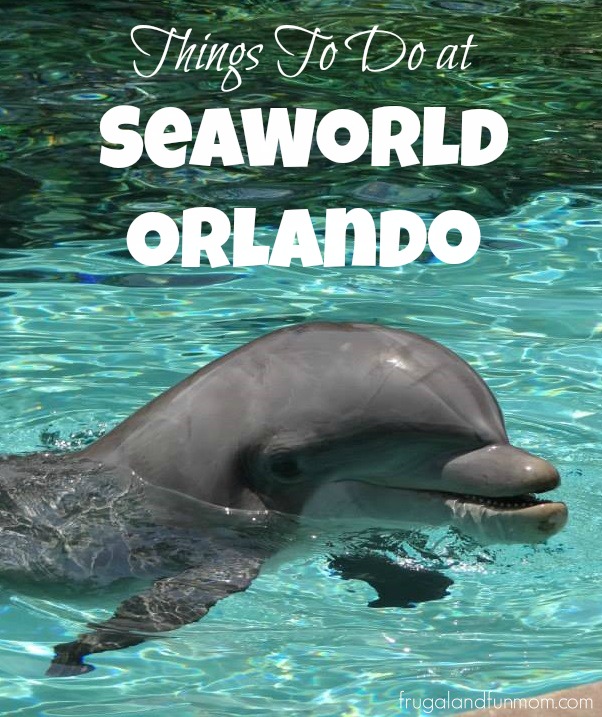 I am happy to report, that my family made our very first trip to SeaWorld Orlando.

Since it has been years since my husband and I both visited, it really felt like a first time adventure for all of us. For our children, this was definitely a place of wonder, and they couldn’t wait to get out there and explore the park. 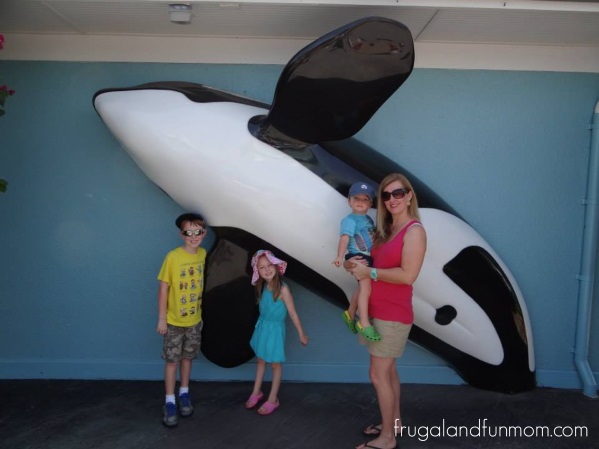 However before we embarked on our adventure at this Florida Travel spot, I asked one of the representatives what they thought were the definite must see attractions inside. After getting this “Road map” and venturing about on our own, here are the Things We Saw and Did At SeaWorld Orlando. 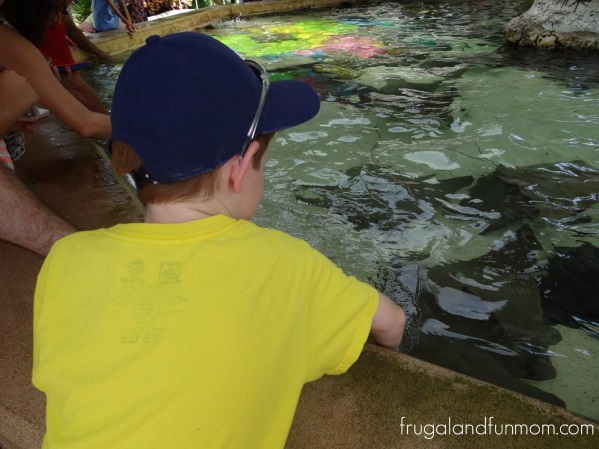 Our first stop at the park was to the left of the Manta Roller Coaster at Stingray Lagoon. There they have hands on and close up encounters with rays. 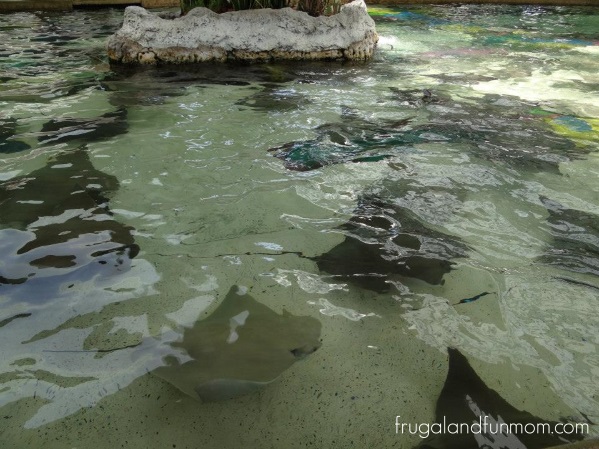 We were able to touch Stingrays and needless to say my 8-year-old son was so excited to do this. My 5-year-old daughter was a little timid, but she did enjoy watching them. 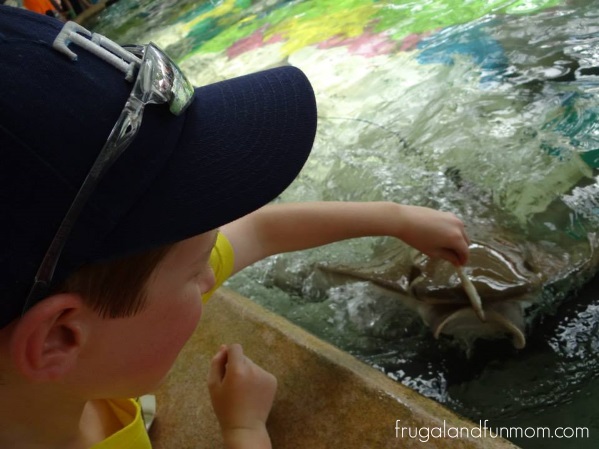 For an additional fee we could also feed them, so again my son got right up there with a fish.  As you can see by the photo, the rays were coming right out of the water for their treats. 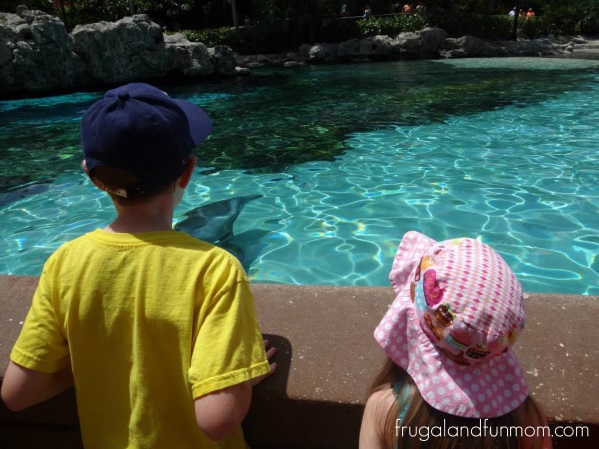 Next, we headed over to the Dolphin Cove area.  We watched the porpoises frolic around in the water and they were so close that you could touch them. 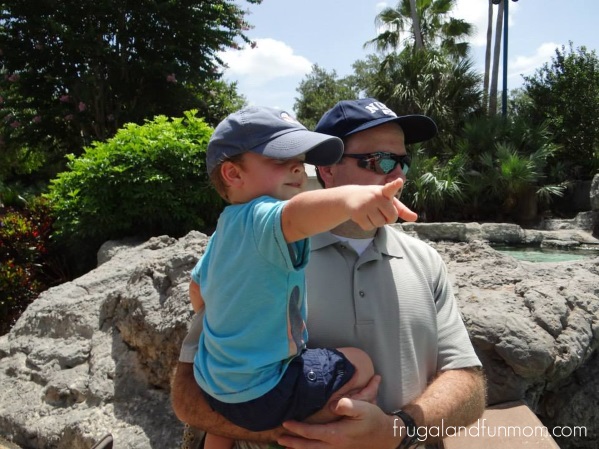 My kids would have stayed there all day watching, and this even caught the attention of my almost 2-year-old.

This would probably be the closest any of us would come to these animals, and they were so beautiful. 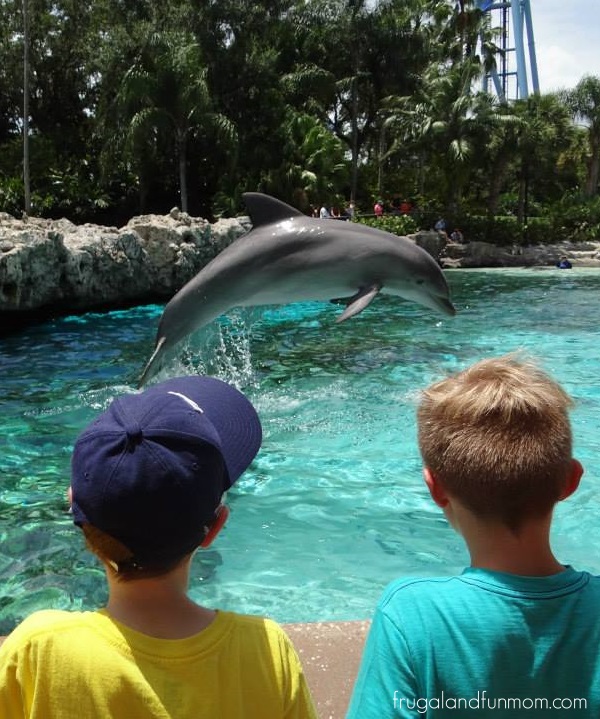 Of course the best part was watching my oldest son’s face as they came up out of the water.

All he wanted was to get splashed, and of course he got his wish. 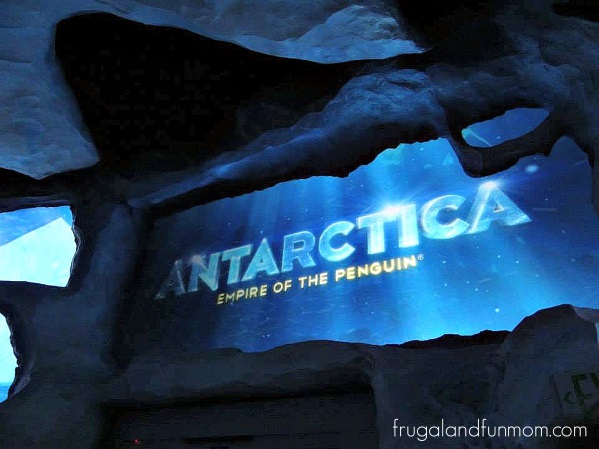 Next, we ventured over to the ride Antarctica: Empire of the Penguin.

This action packed adventure not only took our family through a virtual world of the penguins, but revealed a cold habitat at the end. 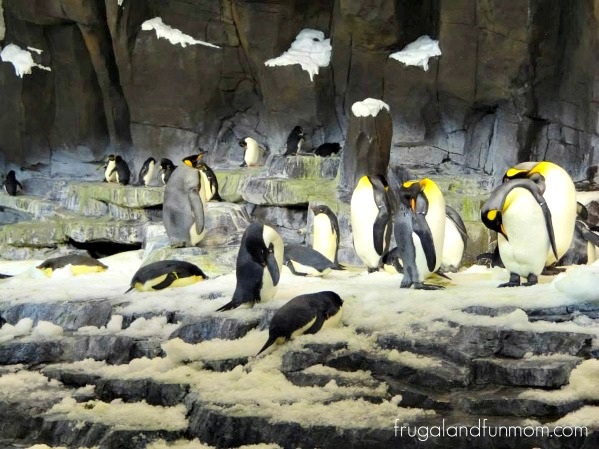 After the ride portion was over we actually got to get out and walked around in a chilly environment.

There we saw penguins chatting, standing, and swimming at super speeds. 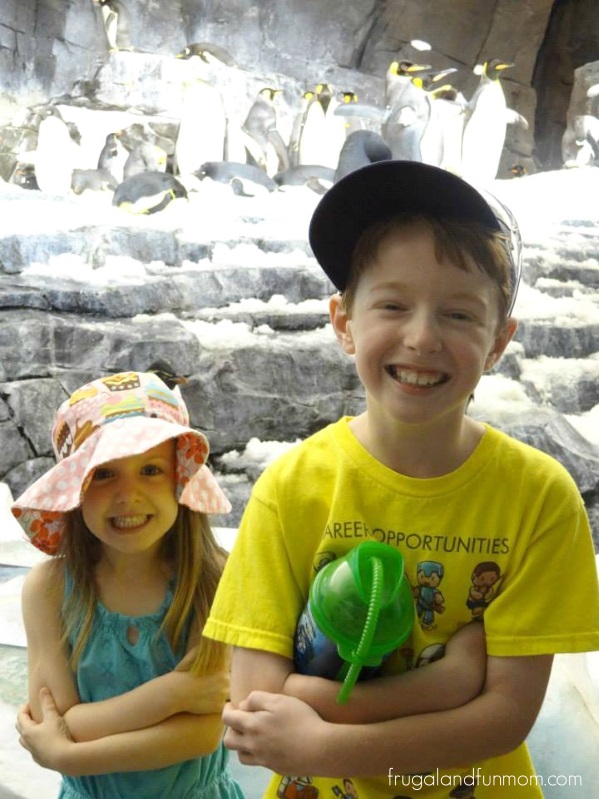 We didn’t stay in there too long since my guys were chilly, but we did go out and from below we watched the penguins swim in an underwater observation window. 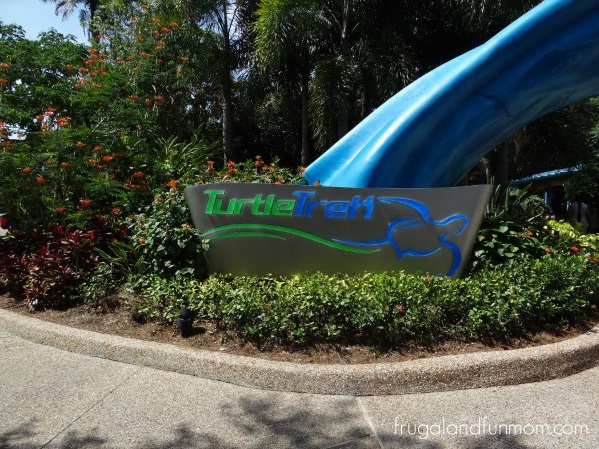 After this, we back tracked to the Turtle Trek exhibit. In this area, there is a lot of information about conservation of animals and how SeaWorld either rehabilitates and releases or becomes a home to animals that are to injured and cannot be returned to the wild.

As we headed in to see the animals, there were signs that went into detail about efforts to save and protect animals. 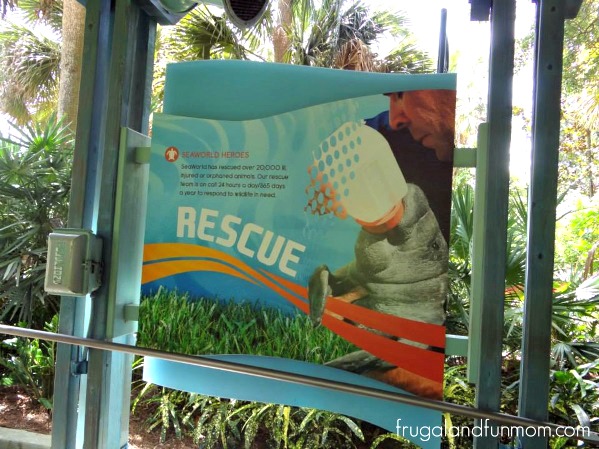 Inside we saw Sea Turtles that had been hurt and saved by the staff of SeaWorld. One of the park employees told us the story behind a few of the injuries and how they nursed these animals back to health.

The particular Turtle shown in this photo had lost the ability to use its back legs, so it now has a permanent home in this enclosure. 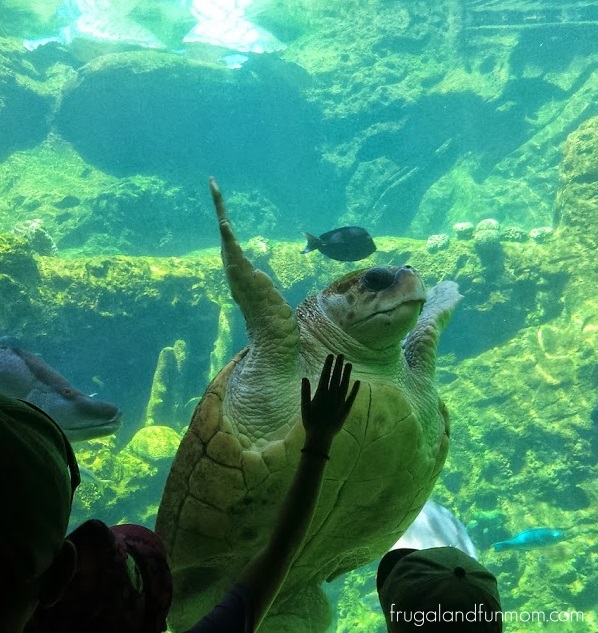 After this, we watched a 3D CGI movie in 360 degree dome theater that documented the life cycle of a Sea Turtle. My 5-year-old had to cover her eyes a couple of times, but otherwise it was a really neat film. When it ended, we exited into an area that housed Manatees.

At this point it was time our family to take a break for lunch, so we enjoyed Hot Dogs at Captain Pete’s Island Hot Dogs Restaurant. Each of those “Dogs” were enough to feed 2 but of course I indulged and ate and entire one. It was YUMMY! 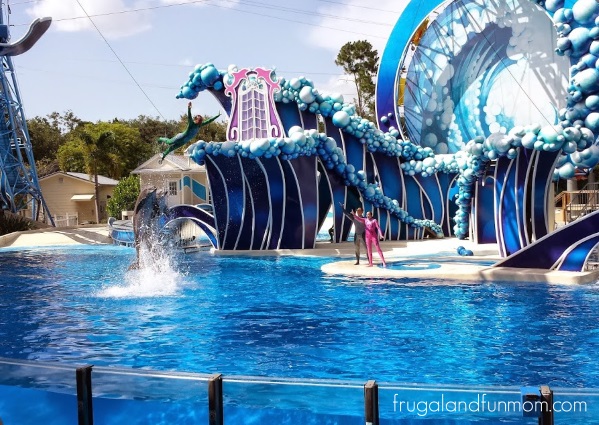 Once we rested, we were ready to see a show so we headed on over to watch Blue Horizons.

My daughter was immediately drawn to this since it centers around the imagination of a young girl. Of course we called her a princess. 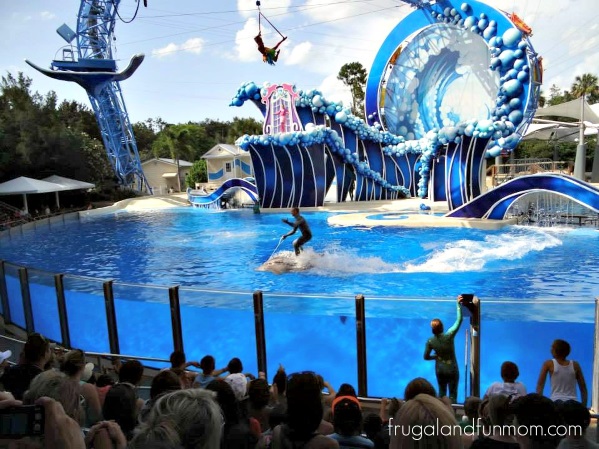 This performance had dolphins, exotic birds, and world-class divers.

It was in constant motion and the acrobatics the dolphins performed were amazing. 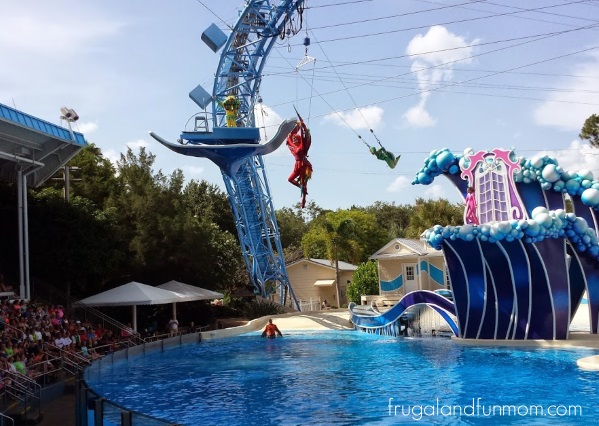 Of course it got even more exciting when the cast of elaborately dressed aerialists hit the scene.

They were swinging above while others dived.  It is a definite a must see show in the park. 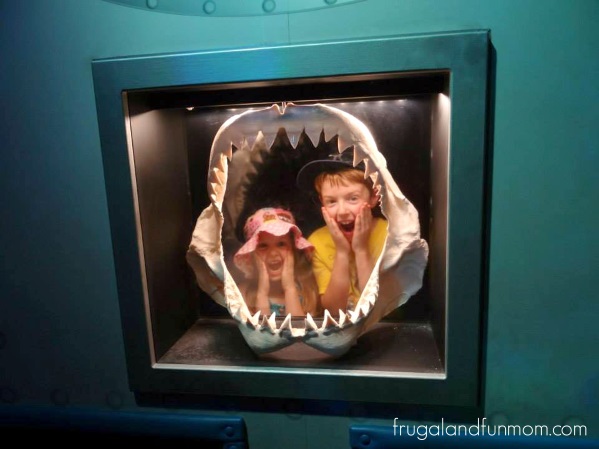 One of the exhibits both my husband and I remembered as kids was the Shark Encounter. I have to admit that my kids were a little scared of checking this out, but they soon warmed up to it once they saw how safe and pretty it was.

It is hard to take a photo in that area, so you will just have to take my word that it was awesome. 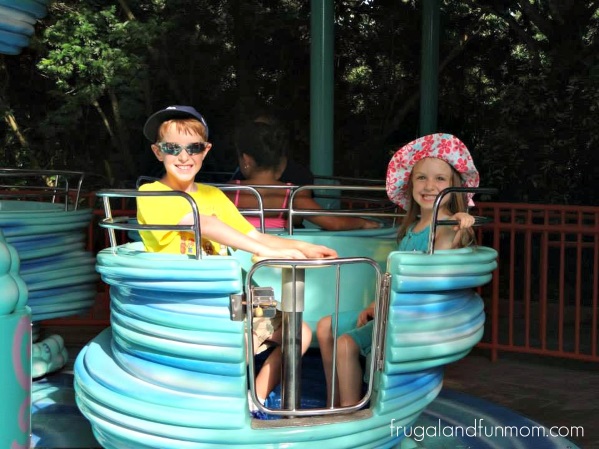 My kids had been asking all day if there were rides for them, and we found those in Shamus Happy Harbor. As you can tell by the expressions on their faces, it really was a “Happy” place.

They also wanted to put on their bathing suits to play in a water area, but we needed to head on over to catch the last show of the day so next time this will be our first stop. 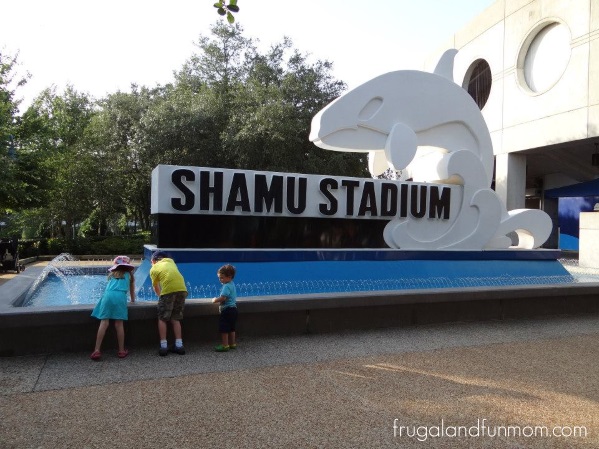 Since our day was starting to wind down, this was a perfect time to sit and watch a grand finale.  For me this was seeing Shamu in One Ocean. 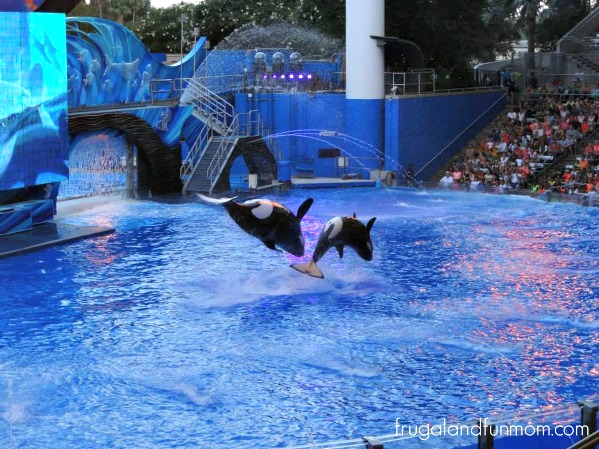 When I think of SeaWorld, I think these whales, and seeing them again really took me back to my youth and traveling with my parents. 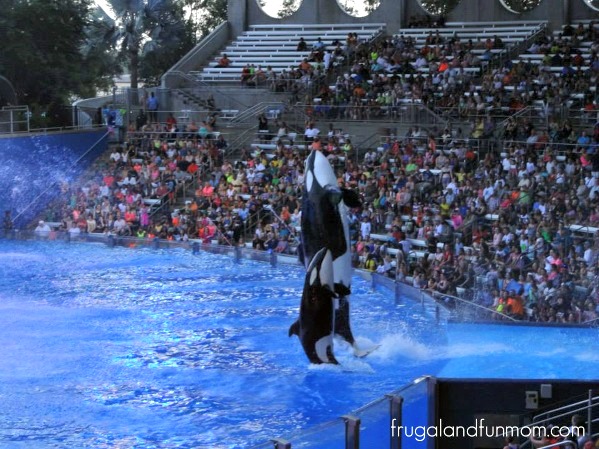 Watching these large creatures come out of the water is breathtaking and definitely reminds me that people are not the biggest animals around. 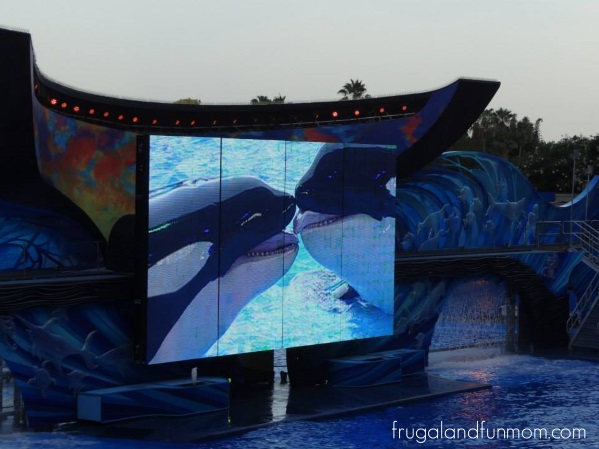 After this, we stopped off for the buffet dinner at the Terrace Garden Family Buffet, picked up some souvenirs at the Emporium Gift Shop, and since it was closing time we headed back to the hotel. 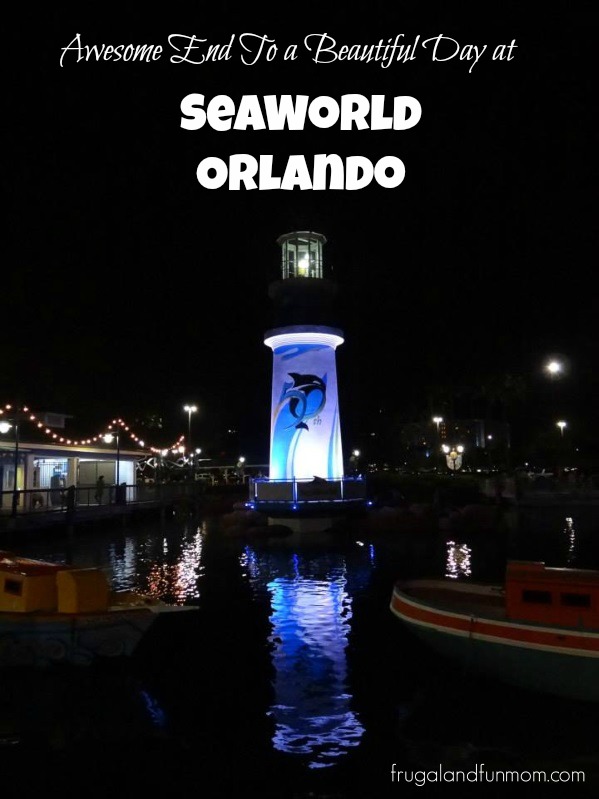 Have you ever visited SeaWorld Before?  What was your favorite attraction there?

To learn more about the SeaWorld visit their website at seaworldparks.com. For special offers and up to date information about the Orlando park check them out on Facebook  at facebook.com/SeaWorld and Twitter at @SeaWorld.

Taking this family trip was such a great experience, it let us reconnect for a bit and spend quality time together. I can’t wait to visit again!