Thanks to Disney, my family got to see an advanced screening of their newest movie called “Brave” this past week. First off, before I tell you anything about this film, my family really liked it, and my kids are still talking about it.

If you are not familiar with the story,  “Brave” follows the heroic journey of Merida, a skilled archer and headstrong daughter of King Fergus (voice of Billy Connolly) and Queen Elinor (voice of Emma Thompson).  Determined to carve her own path in life aka “Her Fate”, Merida defies an age-old custom sacred to the unruly and uproarious lords of the land: massive Lord MacGuffin (voice of Kevin McKidd), surly Lord Macintosh (voice of Craig Ferguson) and cantankerous Lord Dingwall (voice of Robbie Coltrane). 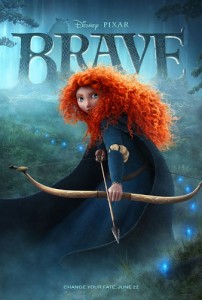 Merida’s actions inadvertently unleash chaos and fury in the kingdom, and when she turns to an eccentric Witch (voice of Julie Walters) for help, she is granted an ill-fated wish. The ensuing peril forces Merida to harness all of her skills and resources – including her clever and mischievous triplet brothers – to undo a beastly curse before it’s too late, discovering the meaning of true bravery. The film is directed by Mark Andrews and Brenda Chapman, and produced by Katherine Sarafian.  It is  presented in Disney Digital 3D™ in select theaters. Source Disney Pixar.

Check out the following trailer:

This film has great visual effects, it is a wonderful story with positive female characters, it is filled with humor, and has just a little action to keep you on the edge of your seat. We got to see it in 3D, and I could hear my son saying oohs and ahhs next to me. In regards to the visual effects, in the opening scene,  the illustration of the Scottish Countryside is wonderful.  And, throughout the film, the attention to detail is very  specific even down to the flowing hair of the main character Merida.

As for the story line, many times when you see a movie that involves a female lead character who is a princess, the film centers around her being a damsel in distress, that is waiting to be rescued by a male that is her romantic interest.  This is not that kind of film. You have strong female characters including Merida and her mother the Queen Elinor, who are both stubborn and determined to push their opinions on one another and the people around them. However through some bad choices, they both realize that they have to learn to compromise, be accepting of alternative ideas, and ultimately work together to solve problems.

Humor resonants through most of the film, especially with the King,  the Lords of the land and their offspring, and Merida’s 3 triplet brothers.  All of these characters are constantly in some type of comical situation. At some point in the film their antics lead them to losing part of their clothes. However, it is not offensive in my opinion (nonsexual) and only involves their bottoms being shown. I asked my kids what they thought of these scenes, and they thought they were hilarious.

As for keeping the viewer on the edge of their seat, shortly after the film begins there is a scene with a bear attacking, and towards the conclusion of the film there are 2  similar  scenes.  I actually consulted my kid’s opinions about these parts of the film, a 3 year old and a 6 year old, and they said they were a little scary. So depending upon your child’s maturity, you may want to warn them in advance or be ready to comfort them if they get scared. Overall, this film has a great mix of components and my kids are already asking if we can purchase the DVD when it comes out.

For more information on the film visit Disney.com/Brave or check them out on Facebook at facebook.com/PixarBrave or follow them on Twitter at twitter.com/disneypixar. The film is out in Theaters today June 22, 2012 and is Rated PG.

I hope you enjoy the film as much as my family did!

Tickets, Photos and Movie Details provided by Walt Disney Studios. Opinions expressed in this post are that of my own.