There is a DVD that was released on October 4, 2011 by Phase 4 Films called The True Story of Puss ‘N Boots staring Emmy and Golden Globe winner William Shatner (Star Trek, Boston Legal), and Yolande Moreau (Amélie).
Based in “Once Upon A Time”, the story is about a Miller’s son, who is in love with a princess, and inherits a cat that has magical powers and wears boots.  Through trying to help the Miller’s son win the affections of the Princess, the cat gets them both into all kinds of misadventures. Ultimately, they defeat an evil Chamberlain, take over the castle of an Ogre, and win the heart of the Princess. 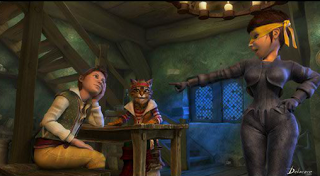 The True Story Puss ‘N Boots is an adaptation of the story and characters created by Charles Perrault.  Charles Perrault is also known for his versions of other fairy tales such as Cinderella and Little Red Riding Hood. Source Amazon – The fairy tales of Charles Perrault
I read the original story by Charles Perrault,  and although there are some similarities to the story, there are some vast differences as well.
My kids enjoyed this movie because they like music, dancing, and thought it was funny. The movie is rated G, however, like many classic stories, there is some content that is intended for adults (it went right over my kid’s heads). If you are extremely conservative you may want to view the movie before your kids just in case there are any parts you would want to skip over. In addition, I don’t think William Shatner did the greatest job as the voice of Puss N’ Boots, but my kids did not seem to mind.
The DVD is in full animated CGI and runs for 79 minutes. It also features familiar songs such as “I Feel Pretty” and a version of “Just a Gigolo” and includes an exclusive interview with William Shatner. This DVD retails for $19.99  For more information on the movie, visit pussnboots-themovie.mk2.com
FYI, this movie was originally released in 2008 and is not the one that just came out in movie theaters.
At Home Moma
At Home Moma did not receive compensation for this post but was provided a DVD for review through Team Mom and Phase 4 Films. The opinions expressed in this post are that of my own.