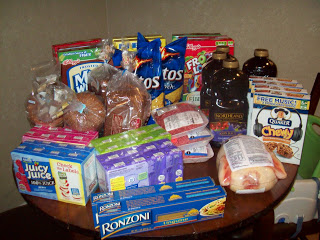 Be warned, this is a bit of a long post, but hopefully it will clear up some things.

I have been posting information recently about couponing and saving at the grocery store because in my many Internet travels I saw how all these other moms were saving so much money.

I decided that I would start breaking down the ad of the grocery store that I frequent the most, and try to start matching up on line coupons and coupons that were coming in the newspaper with items that were on sale.  I was saving about 30% off on my bill.

But I just knew that I could do better.

First thing I realized, was that I was going to the grocery store way to much. Between my husband and I, we might go 2 to 3 times a week.  First off, that is a hassle, second off we were buying a lot of things that we didn’t need that in addtion were not on sale, and finally I was not properly planning out my meals for the week so I was getting frustrated at dinner time.

Second thing I realized, was that I needed sets of two coupons when the store was running BOGO (Buy One Get One ) so my Grandmother graciously donated her ads to me and I added them to my coupons from the paper. The reason why you need two coupons per set of BOGO is so you get a total discount on both items. The grocery store will use 2 coupons on each set of BOGOs.  They don’t care that the second one is free, they just need two items to be sold from inventory.  The more papers you buy the more coupons you have, but buy them in twos.  Also, when you print coupons online, you can print each one twice.

I made this scenario up, but let this serve as an example:

Third thing I realized was, that I could clip competitors coupons and take them to my store and use them (happens to be Publix).  Not all stores will do this, so you should call your Grocery Store to see if they will honor competitors coupons. Publix Accepts Competitors Coupons

or they had a coupon that was Buy One Ground Chuck get Two Free, and Publix accepts these.

But I just knew that I could do better.

One of my mommy friends Kara, told me about a seminar being put on by TrueCouponing.com at a local church, and they were advertising that they could save you more money on your grocery bill and so I thought, this may be the way to save even more.

So I went.  Many of the ideas I was implementing already were reinforced at this event, but there were two things that I was not doing.

#1 Keeping my ads for 3 months (don’t clip them until you need them). Items featured in coupon inserts tend to go on deep discount (BOGO, 50% off) around 3 months after to coupon is initially printed. Don’t worry if your coupons expire, because unless the item is on deep discount, it is not a good deal. (But if you need to buy certain groceries now, use the coupons that you have, a discount is better than no discount)

#2 Matching up sale items with manufactures website coupons. I was only using Coupons.com. 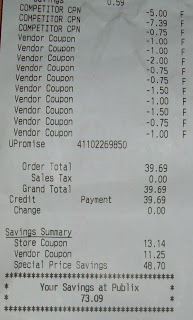 So I implemented this idea this week, and I saved 65% off my bill.

Now before you go any further, there are a couple things I want to recommend to you:

First, make sure you have updated virus protection.  Many of these coupon sites have viruses.  From first hand experience it can be costly if you pick up a virus.  We now are using  ESET, but I heard AVG is also good. Our previous virus protection actually gave us a refund.

Second, don’t let couponing consume you. There is no way humanly possible that you can know where every coupon is located.  So I would recommend subscribing to a site like Truecouponing.com because they have a database of all the coupons matched up with grocery store ads that are out there on line at Manufacturers, Coupons.com, Red Plum etc. and they will tell you what insert the coupon came in so you don’t have to clip the coupons until you need them. 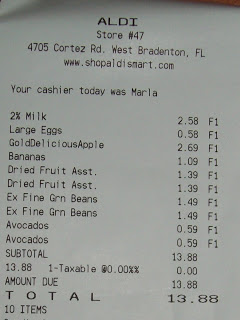 Fourth, sometimes you have to go to another store.  In total this weekend, I actually spent $63.00 in groceries.  After I left Publix, I went to Walmart to pick up my favorite coffee because it was not on sale, but Walmart is the cheapest I have found, and I had a coupon.  Plus, I buy my frozen shrimp there.  Then, I headed to Aldi to get my eggs, milk, frozen veggies, and misc fruit because they currently have the cheapest prices on those items.  Bananas were .39 cents a lb and eggs were .58 cents. So my actual percentage on paper was not as good, but I really saved a ton of money this week.

Now everyone has there own system, but this seems to work for me. I hope this post helps answer the questions posted earlier from:

Tami- Sounds like you got some good tips at the conference!Please share.Thanks

Anonymous- Could you explain how it works when you hold on to the coupons and wait for the sales? Normally the coupons I come across are only good for a few weeks at best and don’t last till 3 months later when the items go on sale…?? Thanks!!

If you have any other questions or additional ideas, post them, and I will try to answer them as best as I can.