The following post and giveaway is in partnership with DC TEEN TITANS GO! TO THE MOVIES. Opinions expressed are that of my own. 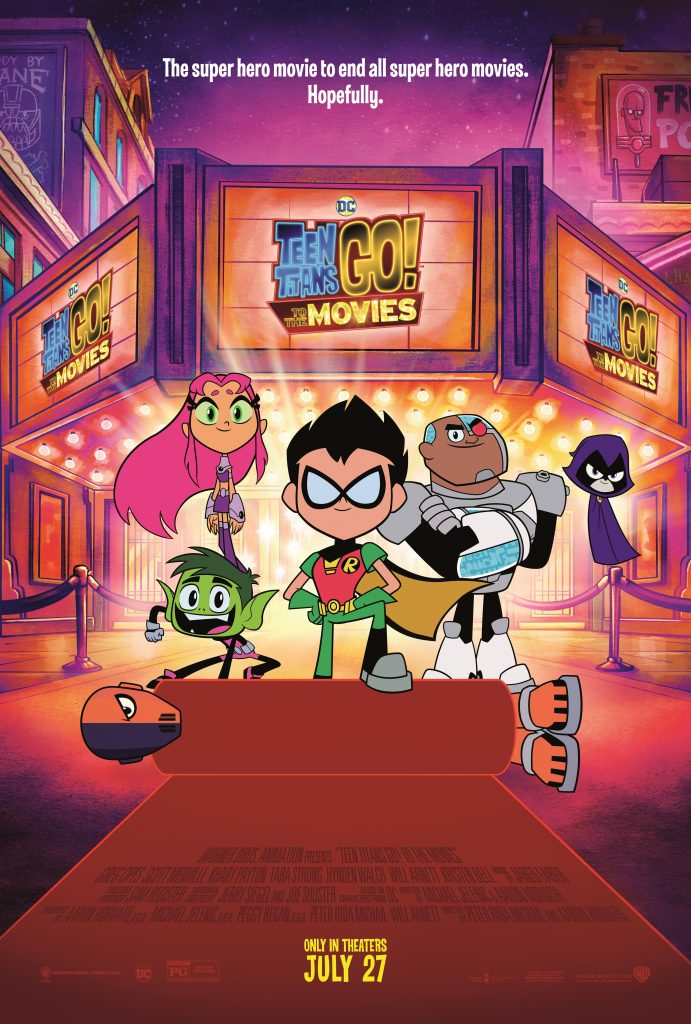 A couple weeks ago I had shared my family’s excitement about the upcoming TEEN TITANS GO! TO THE MOVIES film, and that we would be going to see an advanced screening. Well today I am back to tell you that this movie was SO MUCH FUN to watch!

Filled with many unexpected DC Superhero Moments, Pop Culture References, as well as shout outs to other cartoons and comic book characters, my family really enjoyed the film.

As a child that was born in the 70’s, I am a little sentimental about the classic DC stories of Superman, Batman, and Wonder Woman. I grew up looking up to superheros portrayed by Christopher Reeves and Lynda Carter, as well watched multiple actors play Batman versus comical villians. Of course we have had recent remakes with more darker origins, but most of my kiddos haven’t had an opportunity see any of these with the exception of Wonder Woman.

Teen Titans GO is a great bridge between the past and present, because it references these original stories and adds in humor that we all can appreciate. Plus, when we watch the show on Cartoon Network I find myself laughing at the same punch lines as my kids. This is exactly what we did when we saw the movie. 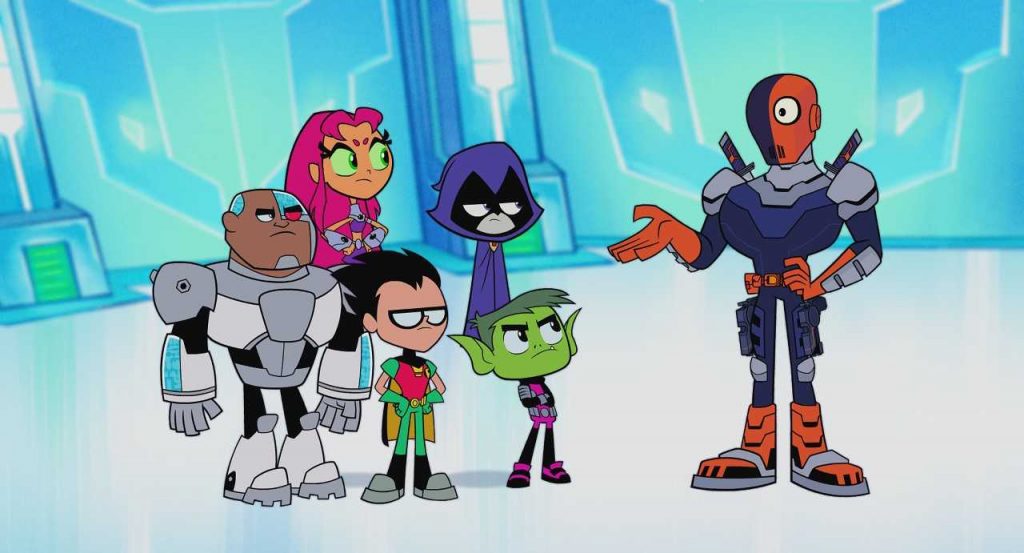 Now I am no spoiler, but I will give a heads up on some crude humor like characters talking about Pooping, Farts as well as some booty shaking. However if you have ever watched the series on Cartoon Network, this would not come as a surprise.

Plus the end credits scene of the film throws out a curve ball statement from Robin, meant to be funny and directed at MOM and DAD. (You will most likely get a chuckle, and probably best not to take it too seriously or show to much of a reaction in front of your kids, otherwise you might be getting some questions, LOL.)

Here is what my family had to say about TEEN TITANS GO! TO THE MOVIES!

6 Year old Son, “It was funny and I liked what Slade said and did. I also liked how the Teen Titans teased him about being Dead Pool.”

9 Year old Daughter, “I liked how they went back in time and showed the DC Superheros being silly, especially Baby Superman.”

12 Year old Son, “I thought that it was hilarious and liked the new songs in the movie. I also liked how they called Slade Deadpool, that was a funny scene.”

My husband, “I thought it was neat how they did different types of animation throughout the film.” 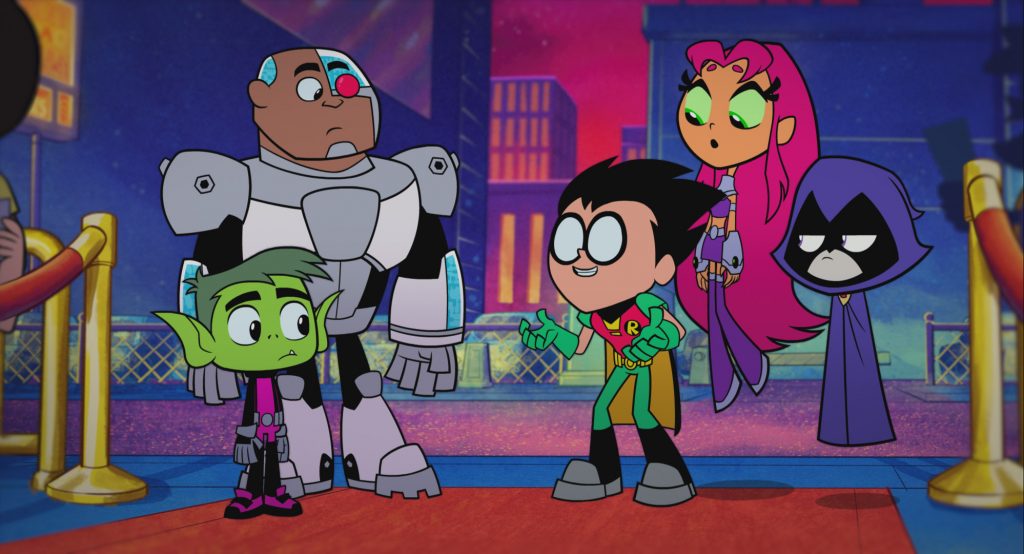 About the film TEEN TITANS GO! TO THE MOVIES:

It seems to the Teens that all the major superheroes out there are starring in their own movies—everyone but the Teen Titans, that is! But de facto leader Robin is determined to remedy the situation, and be seen as a star instead of a sidekick. If only they could get the hottest Hollywood film director to notice them.

With a few madcap ideas and a song in their heart, the Teen Titans head to Tinsel Town, certain to pull off their dream. But when the group is radically misdirected by a seriously Super-Villain and his maniacal plan to take over the Earth, things really go awry. The team finds their friendship and their fighting spirit failing, putting the very fate of the Teen Titans themselves on the line! 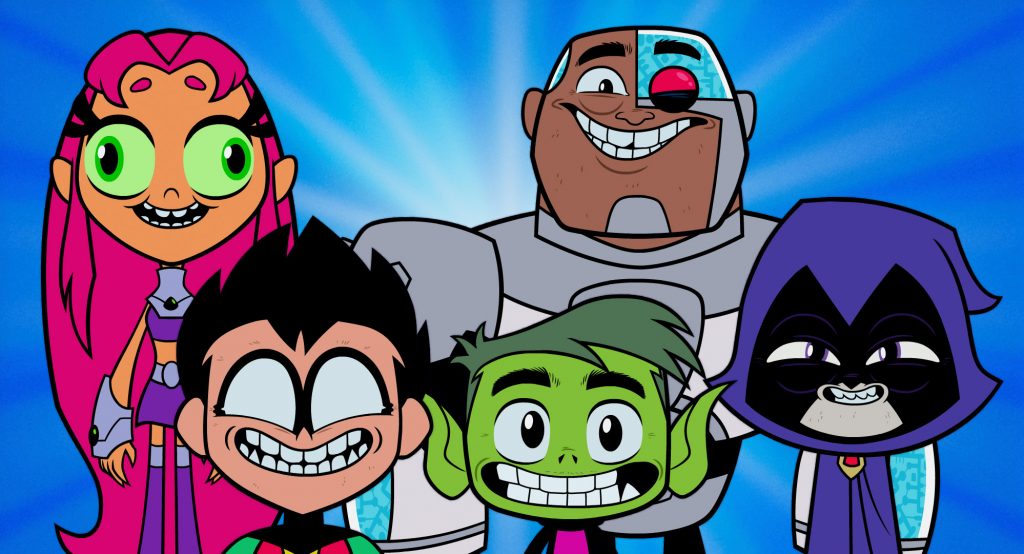 The film is being directed by Peter Rida Michail and Aaron Horvath, from a screenplay by Michael Jelenic & Horvath, based on characters from DC. Jelenic, Horvath, Arnett, Michail and Peggy Regan are producing, with Sam Register serving as executive producer. Apart from Arnett, all are “Teen Titans GO!” series contributors. The film will be distributed worldwide by Warner Bros. Pictures, a Warner Bros. Entertainment Company.

WHO IS YOUR FAVORITE TEEN TITANS GO! CHARACTER? DO YOU HAVE A FAVORITE EPISODE OR SONG? 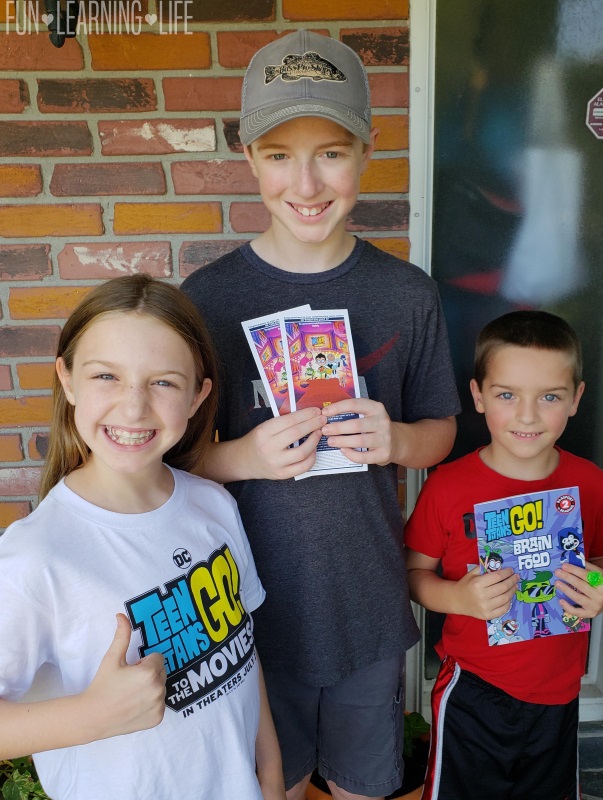 TEEN TITANS GO! TO THE MOVIES opens THIS FRIDAY July 27th AND IS RATED PG.

As you can see, we all enjoyed seeing this film and I hope your family likes it as well!

Thanks to TEEN TITANS GO! TO THE MOVIES, I am giving away vouchers for 4 Fandango Tickets To See The Movie! *

To enter for the GIVEAWAY please follow the directions via the Rafflecopter form below.

*Participants must be 18 years or older to participate and live in the United States. Odds are based on the number of entries, and by participating, you agree to these terms and the laws set forth by your individual state. Entries will only be accepted through the Rafflecopter Form, and Fun Learning Life is not responsible for disruption of the page or service which could cause problems with entering. The winner will be contacted through email (make sure you check your spam or junk mail) with the Subject line “TEEN TITANS GO! TO THE MOVIES Tickets Winner”. Shipping information, including email, phone, and address will be collected at that time. The winner has 48 hours to respond, after that an alternate will be chosen, and so on and so forth. Fun Learning Life does not sell personal information. The prize will be fulfilled by the PR Firm. Fun Learning Life does not share information with 3rd parties unless specifically expressed in a specific promotion or giveaway. This giveaway is not associated, nor sponsored by Facebook.