A special thank you goes out to Disney Home Entertainment for sending my family a copy of the Star Wars The Last Jedi Blu-Ray for review as well as providing press information. Opinions expressed in this post are that of my own.

I am sure you would agree that seeing Star Wars: The Last Jedi in theatres was pretty awesome, but NOW it is even more AMAZING because you can own it as a Blu-Ray and Digital Copy with all the spectacular Bonus Extras. 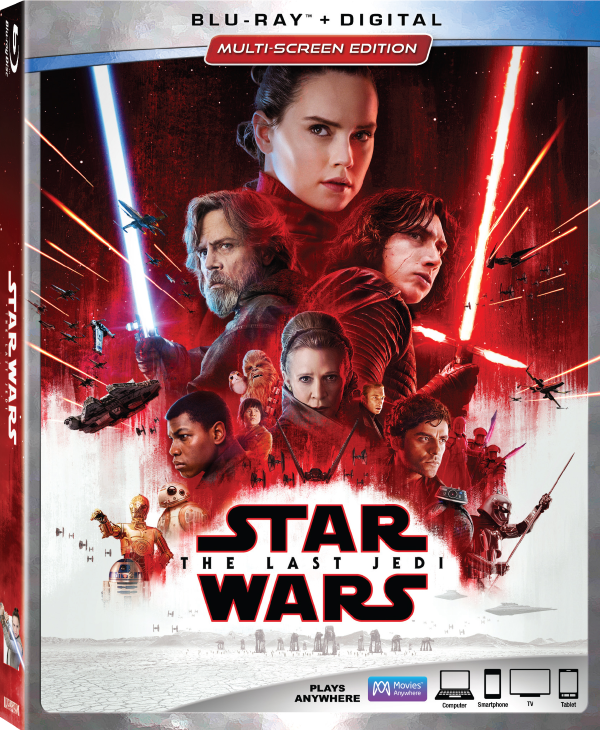 My family and I have been exploring the discs included in the Blu-Ray pack and have really enjoyed watching the deleted scenes, the creation of Snoke in Andy Serkis Live! (One Night Only), as well as the documentary The Director and the Jedi.

However, I have to say that one of the coolest parts of the extras was the “Scene Breakdowns”. I especially liked the Showdown on Crait where it explains how the planet was created as well as how the Vulptex (Crystal Foxes) were brought to life in the film.

I highly recommend taking the time to explore all of the Blu-Ray and Digital Bonus Features, because they really give you a different take on the film as well as insight into all of the work that goes into a work of this magnitude.

In Lucasfilm’s Star Wars: The Last Jedi, the Skywalker saga continues as the heroes of The Force Awakens join the galactic legends in an epic adventure that unlocks age-old mysteries of the Force and shocking revelations of the past.

Director Rian Johnson takes fans on an intimate journey into the creation of Star Wars: The Last Jedi in a feature-length documentary, explaining his unique interpretation of the Force, detailing the painstaking process of creating Snoke, and deconstructing action-packed scenes from the film such as the epic space battle and the final confrontation. Johnson also reveals two exclusive scenes, featuring Andy Serkis as Snoke prior to his digital makeover, as well as 14 never-before-seen deleted scenes, in addition to his audio commentary.

Not only has Star Wars: The Last Jedi Blu-Ray been fun to watch from a view of my TV, but I also love the convenience of seeing the Bonus Extras on my Laptop through Movies Anywhere. To learn more about the film and how to own your own copy visit starwars.com as well as check them out on Facebook at facebook.com/starwars and Twitter at twitter.com/starwars.

Thanks to Disney DVD I have been authorized to giveaway a Star Wars: The Last Jedi Digital Copy to One (1) Lucky Fun Learning Life Reader!

*Participants must be 18 years or older to participate and live in the United States. Odds are based on the number of entries, and by participating, you agree to these terms and the laws set forth by your individual state. Entries will only be accepted through the Rafflecopter Form, and Fun Learning Life is not responsible for disruption of the page or service which could cause problems with entering. The winner will be contacted through email (make sure you check your spam or junk mail) with the Subject line “Star Wars: The Last Jedi Digital Copy  Winner”. Shipping information, including email, phone, and address will be collected at that time. The winner has 48 hours to respond, after that an alternate will be chosen, and so on and so forth. Fun Learning Life does not sell personal information. The prize will be fulfilled by the PR Firm. Fun Learning Life does not share information with 3rd parties unless specifically expressed in a specific promotion or giveaway. This giveaway is not associated, nor sponsored by Facebook.