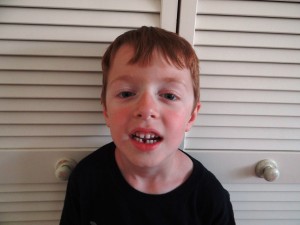 My 6 year old son just had a milestone!

The first official tooth has fallen out.  He was so excited that it was loose, and now he can’t wait to take it to school on Monday to show his classmates.

He is probably one of the last kids in his class to lose a tooth and I think he was starting to think there was something wrong with him.  I told him it was because he has taken such good care of his teeth, that they did not want to come out.

I reminded him not to lose it any further (which he already did once today, thankfully I have good eyes), because we will need to put it under his pillow for the Tooth Fairy.

So that made me think of 2 questions to ask:

When did your kids lose their first tooth?

And, what amount did you leave under your kid’s pillow from the Tooth Fairy?

I’d love for you to leave a comment below.